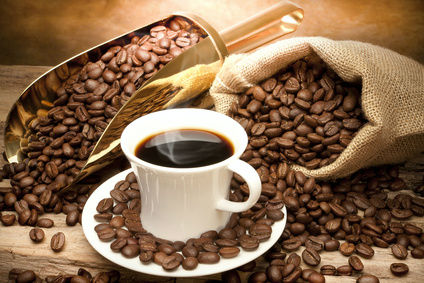 A recent study presented at the American Heart Association’s Scientific Sessions 2013 shows that the caffeine in coffee may help improve the function of small blood vessels. These findings add to a growing body of research of the health benefits of coffee, the world’s most-loved beverage (alongside tea).

To arrive at this connection, researchers analyzed the finger circulation, heart rate, blood pressure and vascular resistance levels of 27 healthy adult volunteers after drinking caffeinated and decaf coffees. The volunteers were not regular coffee drinkers, and were between the ages of 22 and 30.

On the first day of the experiment, each volunteer drank a five-ounce cup of either caffeinated or decaf coffee, and were not told which type they were drinking. Two days later, the same volunteers drank the opposite type of coffee.

The researchers then measured the blood flow in a finger for each participant, after drinking both caffeinated and decaf coffees. This ‘finger test’ is able to exhibit how well the inner lining of the smaller blood vessels function throughout the body.

After adjusting for the role of hormones on the functionality of the blood vessels, the researchers found that the finger blood flow in the volunteers after they drank a cup of caffeinated coffee increased by 30 percent over 75 minutes, compared to the blood flow after the decaf coffee.

Results also showed that after the caffeinated coffee, the inner lining function of the vessels was improved. Compared to the decaf results, heart rate levels were the same, and blood pressure was slightly higher.

Results of earlier studies have linked coffee to improved functioning of larger arteries, as well as lower risks of death from heart disease and stroke. As we reported in an earlier article, coffee may also boost metabolism, help regulate blood sugar and lower the risk of diabetes, improve mental functioning and help reduce the risk of liver cirrhosis.

The exact way in which the caffeine in coffee benefits small blood vessel function is not yet fully understood. Dr. Masato Tsutsui, the lead researcher of this study and professor at the University of the Ryukyus in Okinawa, Japan, hypothesizes that caffeine may reduce inflammation and aid in opening blood vessels.

Dr. Tsutsui says regarding the study, “this gives us a clue about how coffee may help improve cardiovascular health… if we know how the positive effects of coffee work, it could lead to a new treatment strategy for cardiovascular disease in the future.”

To get the most benefits from your cup of joe, choose an organic variety, and feel good about your morning wake-up call!

P.S. Having said this, pregnant women are advised to limit coffee consumption to at most one 12 oz cup per day, and if you want to be extra careful, perhaps cut it out altogether. Caffeine can have negative effects on the developing baby. Just remember, coffee is not the only source of caffeine (and yes, decaf coffee can still contain a fair amount of caffeine).

If you are pregnant and choose to eliminate caffeine, you will also need to look at your consumption of sodas (not just cola but even many non-colas contain caffeine), energy drinks and chocolate – and this isn’t even a comprehensive list. As always, consult a physician to ensure that you make the best choices for your situation.