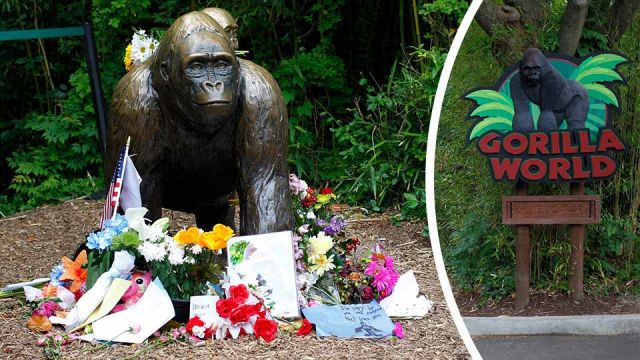 On May 28, 2016, the world lost what would arguably become the most famous gorilla to ever roam the Earth. One year later, Harambe’s successor has been relocated from the Louisville Zoo and is starting to make the Cincinnati Zoo his new home. His name is Mshindi, (ma-shin-dee), he’s 29 years old and he is also a Western lowland gorilla.

Take a Look at Mshindi at the Cincinnati Zoo:

The zoo said he was chosen based on “genetics, personalities and social needs.” The exhibit that Harambe was killed in, called “Gorilla World,” is still undergoing extensive and irrefutably needed renovations; it should be open sometime this fall. The new exhibit will make it almost impossible for any child to fall in, unlike Isiah Gregg, who fell 15 feet into the last exhibit.

For now, Mshindi will join two females currently at the zoo, 21-year-old Chewie and 22-year-old Mara. The zoo plans on introducing them privately before letting them coexist in the same area.

For those that need a refresher on what lead to Harambe’s death, check this out:

To this day, there is widespread outrage and discussion on whether the boy’s parents should have been held responsible for him falling into the exhibit, or if the zoo handled the dire situation properly.

Even with intense backlash from animal rights activists, other zoos and lots of social media campaigns supporting Harambe, the zoo still firmly stands by their decision to kill Harambe, adding that the animal was “clearly agitated, disoriented and acting irrationally.”

Many became familiar with Harambe’s death through posted memes on social media, which eventually became the most popular shared meme in internet history. Harambe’s death also sparked millions to promote awareness about the situation. The mother of the little Isiah Gregg, on the other hand, thinks the zoo acted properly and can’t thank them enough for putting the safety of her son first.

Mshindi’s arrival has sparked criticism and approval online. Some think that the new gorilla shouldn’t be added to the zoo out of respect to Harambe, while others think that it is time to move on and embrace the inevitable new change.

Who in the heck allowed the Cincinnati zoo to get another gorilla?? #RIPHarambe #NeverForget https://t.co/YeTWyAhQpB

You can add a new gorilla, but you can’t replace an American hero. #RIPHarambe https://t.co/7aNg7fHDwc

The day has finally come… may be replaced, but never forgotten #RIPHarambe https://t.co/d8M3Nlpoc2

We must protect this gorilla at all costs. #RIPHarambe https://t.co/J9m3Hdhkhe

Let us know what you think of Mshindi’s arrival in the comments below! Has the Cincinnati Zoo proven to be irresponsible in handling their animals, or are they making the right move?