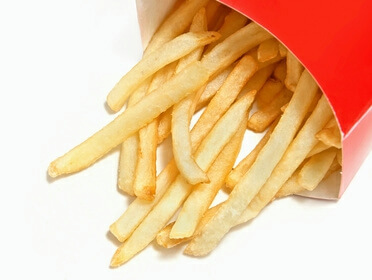 We all know that McDonald’s isn’t going to get confused as a health food location – that’s no secret. However, just how bad their french fries are is staggering. In an effort to be more ‘transparent’ about what’s in their food, perhaps to get consumer points for honesty, McDonald’s has revealed that their french fries contain 17 ingredients.

The run-of-the-mill french fry is bad enough. Standard french fries are made from two ingredients: potatoes and oil, which doesn’t sound too scary. However, starchy, white potatoes provide very little nutritional content (particularly when compared to the much healthier potato, the sweet potato), and the oil they are deep-fried in is often corn, canola or cottonseed, which are usually genetically modified in the United States.

The process of deep-frying itself comes with significant health detriments. Cooking at high temperatures, especially deep frying, produces acrylamides, chemicals that have been linked to cancer and nerve damage.

Among the ingredients in McDonald’s french fries are canola oil and hydrogenated soybean oil. Canola oil and soybean oil are almost always genetically modified. As an added bonus, soybean oil has a high trans fat component. According to nutritional experts, there are no safe levels of trans fats for human consumption.

The fries also contain dextrose, a form of sugar, as well as dimethylpolysiloxane, an anti-foaming agent which is actually a type of silicone. Sodium acid pyrophosphate is added to ‘maintain color’.

This last ingredient, while approved by the FDA in ‘dispersed form,’ is a skin and eye irritant and has been linked to severe inflammation upon direct contact, inhalation or ingestion in its undispersed form. Probably not something you want in your food.

McDonald’s fries also have extremely high levels of refined sodium, which has been linked to high blood pressure, cellular dehydration, and a variety of health issues. While unrefined sea salt has many health benefits, refined sodium is highly processed, and has many potentially negative effects.

If you or your children are looking for a delicious snack to munch on, one yummy recipe is to cut peeled sweet potatoes into strips, and bake with some organic olive oil. You won’t get the high acrylamide content from deep-frying, and sweet potatoes offer a wide variety of benefits, such as beta carotene, that white potatoes simply do not have.

In any event, skip the McDonald’s fries. They are even worse than we thought.