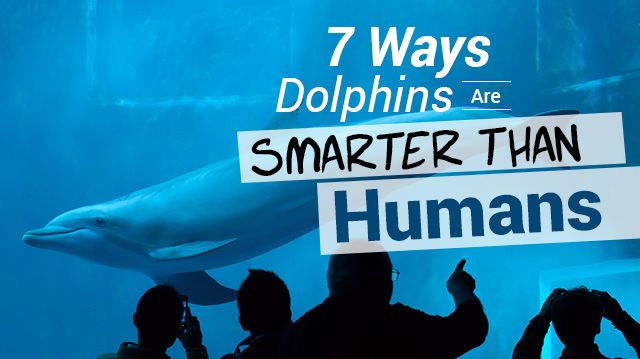 When it comes to animal intelligence, dolphins are near the top of the brain chain. The species is generally considered the second most intelligent species after us, with chimps coming in third. In certain ways, dolphin intelligence surpasses that of people. The brains of certain dolphin species, such as the bottlenose, are larger than human brains.

Keep in mind that dolphins are not domestic animals, although individuals have been domesticated. Their ability to think, plan and perceive developed outside of the human experience, unlike smart domestic creatures such as dogs. Dolphins were never bred for specific attributes — they have evolved without human interference.

Language system
Dolphins communicate with each other through an intricate language system. It consists of behaviors, such as physical contact to make a particular point. Like people, they use gestures to express feelings and reactions. They make an array of noises that make sense to other dolphins. Each dolphin possesses a “signature whistle,” and it’s hypothesized that whistle is the dolphin equivalent of a name. Unlike some people, dolphins appear to remember the names of fellow dolphins years after they last met.

While their language doesn’t make dolphins smarter than humans, it appears to be more universal. Thus, there isn’t a “language barrier” for dolphins living in different part of the world.

Echolocation
Echolocation is the location of objects through reflected sound. Humans don’t have this capability, but dolphins do, and they use it to navigate waters and find food. Researchers developed sonar and radar inspired by the echolocation abilities of dolphins and bats. For dolphins, echolocation is the primary sense, far stronger than vision.

Scientists aren’t sure exactly how dolphins echolocate. The frequency of their echolocation sounds are too high for human ears to hear. To date, no studies have succeeded in replicating this sound. One theory is that mucus on the fatty strips below their blowhole is integral in allowing dolphins to make hundreds of echolocation clicks in just seconds.

Dolphins’ echolocation system is so accurate that the United States Navy uses them in its Marine Mammal Program to find mines buried at sea.

Game creation
Dolphins are second only to humans in game creation, but play many of these games with other species. Dolphins and humpback whales are known to play together, with the dolphin swimming onto the whale’s nose. The whale then raises his head, and the dolphin slides down into the water. The sequence is often repeated, with both parties having “a whale of a time.”

Quick judgment
The dolphin brain consists of four lobes in its two hemispheres, while our brain has only three lobes. While human senses are split between lobes, all of the dolphin’s senses are located in that fourth lobe. What does that mean in terms of dolphin cognition? It may indicate dolphins are capable of making much faster decisions than we are, and reducing the complexities of a situation much faster than we are capable of doing.

Understanding us
We may not be able to understand dolphins when they communicate, but they can learn to understand human language. Trained dolphins are known to comprehend hundreds of words, and respond to specific gestures.

Acting ethically
Dolphin society is complex, but appears to have ethical components. We know that dolphins don’t declare war on each other, which makes them smarter than people in one major respect.

Only half asleep
Unlike humans, dolphins are never completely asleep. If they went into full sleep, they would drown, since consciousness is required to breathe. Instead, half of their brain sleeps, and the other stays alert. Technically, this is known as “unihemispheric slow-wave sleep.” During sleep, one hemisphere of the brain shuts down, and the dolphin’s opposite eye closes. The awake hemisphere monitors the environment and ensures breathing. Unlike humans, dolphins are not caught unaware because of slumber. It also means that captive dolphins can’t receive anesthesia for treatment of serious wounds or illnesses.

Human intelligence and dolphin intelligence are very different. Comparing one to the other is like comparing apples to oranges. However, dolphins can solve problems and think creatively. They display those traits in their own environment, which is not our world.