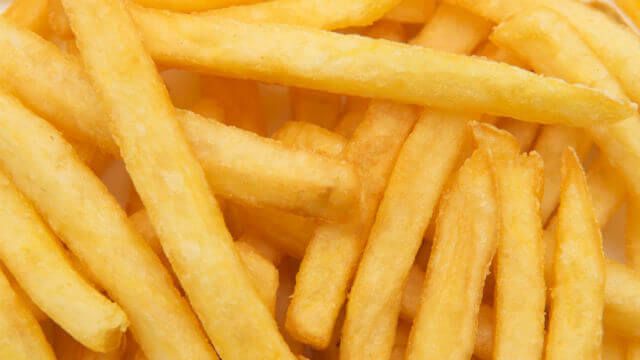 Making a french fry is a pretty simple process. All it really takes is potatoes, some kind of fat, and salt. Some people may sprinkle a few spices on top for flavor. While the deep-frying process is definitely unhealthy, at least we all know what potatoes, oil and salt are.

McDonald’s, on the other hand, doesn’t keep their fries that simple. The franchise, amid plummeting sales, has released a series of videos showing how their foods are made, aiming to give consumers greater peace of mind.

In one video, Grant Imahara, the former host of the popular series “Mythbusters,” sets out to solve the mystery of the McDonald’s fry. However, while the tone of the video is assuring, and all 14  of the ingredients are described in innocuous terms, what the video actually accomplishes is showing us exactly why we should not be eating these little sticks of poison.

Now, what about the oil used to partially fry them, before they are frozen?

Canola oil: You lost us, McDonald’s, and it didn’t take long. Canola oil, which doubles as an insecticide, is often made from GMO seeds, is highly processed, and often contains obesity and heart disease-promoting trans fats.

Soybean oil: As over 90 percent of the soybeans grown in the US are genetically modified, the oil most often is, too. Plus, it’s highly processed. Not good.

Natural beef flavour: Wait, what? That’s right – McDonald’s fries contain traces of beef – or highly processed beef byproducts. Vegans and vegetarians, take note. Even if you’re fine with beef, when it comes to natural flavors, they can come from virtually anything.

Hydrolyzed wheat: Really? Not gluten free you mean? Are all those gluten intolerant and celiac sufferers out there aware of this? Bad choice again, McDonalds! To be fair, the acrylamide-producing, trans fat laden high heat oils used to cook the fires likely denature the proteins in the gluten – derisking it somewhat (or possibly entirely) for celiac and gluten intolerant individuals – but still – why even ‘go there’?

Hydrolyzed milk: Hydrolysis is basically an industrial process of “digesting” foods – in this case it is wheat (previous ingredient) and milk – with chemical agents. Yuck.

Citric acid: This one’s not too bad, as citric acid is naturally found in fruits and veggies. However, you can bet McDonald’s probably uses a processed version.

Dimethylpolysiloxane (a.k.a.Silly Putty): This is an anti-foaming agent also found in silly putty, plus various sealants, adhesives and lubricants. The processing of this agent allows for small amounts of formaldehyde to be present.

Now, a few more ingredients, sprinkled on the fries themselves

Dextrose: A form of sugar. As we know, sugar is a major player in obesity, type 2 diabetes, tooth decay, heart disease, and more. A health nightmare.

Salt: Salt in itself is essential to life, and real, unrefined salts are nutritious. However, refined, processed salt is a far cry from real, and a far cry from healthy.

Moving forward, the following ingredients are in the frying oil.

TBHQ: This mysterious little ingredient is tertiary butylhydroquinone, a preservative derived from butane. In high doses, it is linked to DNA damage, behavior changes and other detrimental symptoms in lab animals.

Appallingly, in the video, Imahara refers to TBHQ as, “an antioxidant that helps to preserve the freshness of the oil.”An “antioxidant” made from butane? C’mon.

Well, there you have it, folks. Does this recipe sound appealing to you? At the end of the video, Imahara reassuringly smiles at the camera and says, “so at the end of the day it’s not a Franken-fry composed of chemicals.”

Umm… Mr. Imahara, did you read the ingredients?