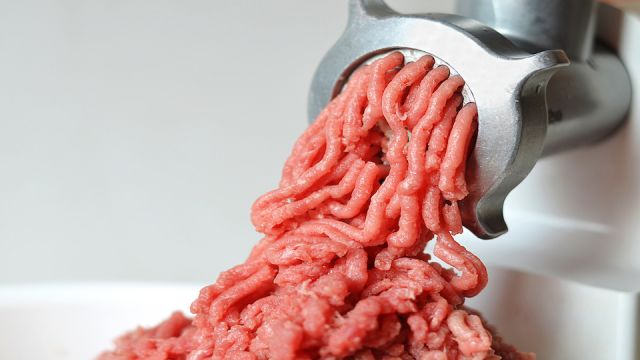 In 2012, ABC News disclosed the details of how lean finely textured beef ( LFTB) from Beef Products Inc. (BPI) was made.The exposed processed involved collecting scraps and trimmings of meat found close to the cowhide (which has maximum exposure to feces), simmering it, separating tissue and fat in a centrifuge, and spraying the resulting sludge with ammonia hydroxide gas to kill bacteria.

Although BPI defended that their product was made from 100 percent beef, their bottom line suffered. They turned around and sued ABC News who eventually settled out of court, claiming to have done nothing wrong. Since ABC News’ investigative report was aired, numerous grocery stores pulled the product from their shelves, and many schools eliminated it from their lunchrooms, and even McDonald’s pledged to stop using (LFTB).

Pink slime is back, and it has a new name

Now, almost seven years later, pink slime is back! But this time it is back with a new name. According to Beef Magazine, the USDA has given approval for “lean finely textured beef” to be called “ground beef.” BPI vice president of engineering states,

“It was an extensive review that took well over six months and included consumer reviews, nutritional panels, tours of the plant where agency folks could get a first-hand look at the process and  understand what we are doing at BPI.”

A spokesperson from the United States Department of Agriculture’s Food Safety and Inspection Service commented,

“After reviewing BPI’s submission of a new product and new production process, [the United States Department of Agriculture’s Food Safety and Inspection Service (FSIS)] determined that the product meets the regulatory definition of ground beef under the law in 9 CFR 319.15(a) and may be labeled accordingly,”

This is a far cry from the previous regulation that ground beef could contain 15% LFTB and still be considered “100% ground beef.”

What this means for companies using the former pink slime

Companies who used LFTI as filler don’t have to disclose that they are using it now because of its new designation as ground beef. BPO states that although it has no immediate plans to sell the former slime as a stand-alone “ground beef product. This does not mean that you will not find the newly labeled “ground beef” in your ground beef… no label necessary.

According to some people in the meat industry, the new designation of pink slime as  “ground beef” will make consumers very leary about other beef products and could even pave the way for lab-grown or cell-based meat to be labeled as ground beef.

To play it safe, its best to avoid purchasing meat from your local supermarket or eating any fast food that might contain the  new “ground beef.” When choosing pastured, grass-fed meat, your best bet is a local farmer who is willing to be open about their practices and tell you about the methods used in both raising and killing the animals.