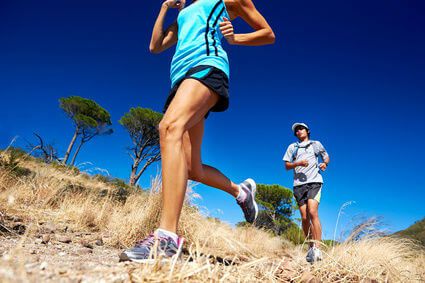 The bane of any dedicated runner is injury. They’ll go to great lengths to avoid it. New shoes every 300 to 500 miles, massage, ice baths, ridiculous-looking calf compression sleeves of every color of the rainbow worn proudly before, during and even after a run; runners will stop at nothing to keep their bodies going strong.

And the long-time theory was that how a runner’s foot hit the ground played a major role in both their performance and whether or not they would suffer an injury. But recent research is taking another look at the theory touting an “ideal” way to run.

One of the major arguments over the years was that forefoot-striking, meaning the runner lands more on the ball of their foot as opposed to their heel, was the ideal running style to avoid injury since it is more natural. In fact, a 2010 study supported this theory and sent the running community into a tailspin of runners looking to change up their style.

Scientists analyzed the foot strike of a group of barefoot runners from the Kelenjin tribe of Kenya. This tribe has a long history of successful distance running as some of the fastest marathoners in the world are of the Kelenjin tribe. An overwhelming majority of these runners were found to be forefoot-strikers when their gaits were analyzed on a track fitted with a pressure plate.

Since these runners have minimal access to modern shoes, much of their running is done barefoot. Thus, scientists deduced that the most natural and fastest way to run was by landing on the forefoot. For a majority of the American population of distance runners this was a devastating blow as studies show that most of today’s runners are in fact heel-strikers.

However, scientists aren’t so quick to ask runners to change up their gaits anymore. When another group of barefoot runners of the Daasanach tribe ran on the pressure plate-treated track, only 4 percent were found to be forefoot strikers while a vast majority hit first with their heel. And recent research is showing that their may be some benefit to the heel-strike after all.

When heel strikers were asked to change their gate and land more on the forefoot, scientists found that a greater amount of force was absorbed in their lower backs as opposed to their legs. Runners adopting this new style also complained that it was uncomfortable and awkward.

Uncomfortable maybe, but does it help keep runners injury-free? That answer is not so black and white any more. Studies  suggest that while heel-striking puts more pressure on the knees of runners, forefoot-striking puts more strain on the Achilles tendons and ankles.

The bottom line is that every runner has their own stride. And while training, cadence and stride-length can all factor into the equation, your best bet may be to stick with the stride you have and work to make it more efficient. Like the saying goes, “if it ain’t broke, don’t fix it.”