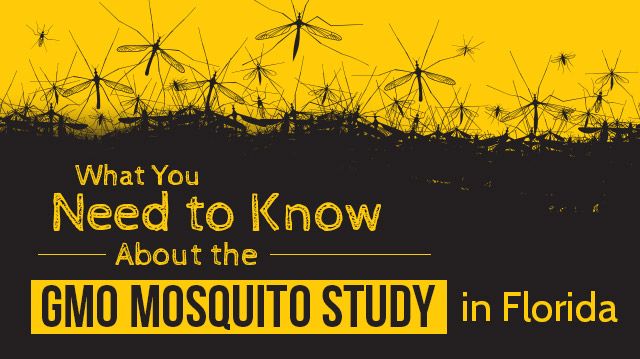 Growing up in Northern Ontario meant that I spent the summer months among hundreds of trees and freshwater lakes. As a result, on any given summer’s day, mosquitoes were as common as the rising sun. After canoeing for hours, I’d be covered in bites — yet the only thing I was concerned about was the nagging itch I experienced.

These tiny, annoying creatures have caused one scare after another — including West Nile virus, and now, the Zika virus. What can we do to protect ourselves from the diseases that mosquitoes transmit? Could genetically modified mosquitoes be the solution?

There is no denying the power of science and technology — resulting in the most significant discoveries. Scientific experimentation helps us discover incredible things about ourselves, as well as the world around us — studies have unlocked remarkable mysteries. That being said, we need to ask ourselves, is there a point at which the level of intervention is too great?

Florida residents are currently facing this dilemma — will a proposed GMO mosquito study push the boundaries of science experimentation too far? Are we intervening too much? What are the risks in comparison to the potential benefits? As Florida residents have stated, they do not want to be guinea pigs, and that says a lot.

There has been zero acceptance from the community, even though a mosquito-raising facility is ready to operate in Marathon, Florida. Once approved, eggs would be sent from the United Kingdom, so that Florida could begin the “growing” process. Here is what you should know about the current situation in Florida.

GMO mosquito study and the Zika virus — what’s the connection?

The Aedes aegypti mosquito is the species responsible for spreading the Zika virus, which is now the focus of this controversial study. Known to cause significant birth defects, the Zika virus is impacting pregnant women, especially in South America. At this time in Florida, however, the number of locally contracted cases of Zika virus is said to be zero.

Within this proposed study, genetically modified mosquitoes will essentially disrupt the breeding of infected insects, reducing the spread of Zika, along with the viral infections known as dengue and Chikungunya. According to the US Food and Drug Administration (FDA), there is a low probability that humans or animals would experience adverse effects.

So, how exactly do these mosquitoes interfere?

The British company Oxitec would supply the insects, also known as OX513A mosquitoes. According to the journal Nature, this firm has been waiting two years for permission to sell these GMO mosquitos, hoping to target dengue fever in Brazil. Now, the attention has shifted to the United States and the Zika virus, forcing Florida residents to mount a campaign in opposition to the proposed use of these GMO mosquitos in their state.

They have stated that “mutant insects” should not be released against the will of the people. While examining genetically modified crops, for instance, unintended consequences have resulted time and time again — damage to ecosystems, herbicide resistance and reduced biodiversity have all resulted.

In terms of genetically modified mosquitoes, the males will carry a specific protein. After mating with females in the wild, their offspring will not survive. The offspring of these GMO mosquitoes does not reach maturity, essentially causing them to die young. The goal is to cause a population crash, reducing the Zika virus risk.

You may be thinking, what if one of these transgenic mosquitoes bites me? We know all the complications and health concerns surrounding the words, genetically modified organisms — how do these concerns translate to a living species? More specifically, a living species that bites humans?

Well, as proposed, only males would be used within this study, as female Aedes aegypti mosquitoes are the ones that draw blood. They use the protein and iron in the blood to produce their eggs — not to feed. Just like males, females feed on water and nectar. So, does that mean there aren’t any significant concerns?

According to the Florida Keys Mosquito Control District and Oxitec, some females will inevitably be released. Meaning, it’s not just males being introduced, and if millions are released, there will be some mosquitoes in that sample that will bite humans.

What evidence has been provided to ensure public safety?

When it comes to public safety with regards GMO mosquitoes, it has been stated that humans are not at risk and that their release would result in plummeting mosquito populations. Sounds ideal, but what about the lack of evidence? What about the select environmental groups and scientists who have raised concerns?

Oxitec is currently planning a study on the transgenic mosquitoes’ ability to reduce viral transmissions. However, it may take several years and millions of dollars. Of course, there is a level of urgency, so are these decisions being rushed?

No clear timetable has been released, so more concrete evidence is yet to be seen. Until then, it appears that far too many assumptions are being made in terms of the potential environmental and human impact of GMO mosquitos. The residents of Florida have a voice and they are becoming increasingly frustrated that they are not being heard.

More antibiotic use — the role of tetracycline

When designing these mosquitoes, scientists developed a method to reduce their lifespan. In order to develop past adolescence, these GMO mosquitoes require tetracycline, an antibiotic. Within the lab, male mosquitoes are given this antibiotic so that they are able to reach adulthood.

Once they are released into the wild, their larvae require tetracycline — without it, they die. Within a few days, both the offspring and GMO males will be dead — well, that’s the theory. A key issue here is that tetracycline has now been found in environmental soil and water samples.

There’s a reason they were designed to die in the absence of this antibiotic — it was assumed that they would not be able to access it once released. Within one review, published in Environmental Chemistry Letters, it was stated that tetracycline antibiotics pose serious ecological and human health risks.

Over 70 percent of antibiotics are excreted into the environment through the urine and feces of both animals and humans. Aquatic environments are particularly at risk, and freshwater treatment plants do not appear to be capable of removing tetracycline antibiotics from water.

This is something that needs to be investigated since the GMO mosquitoes may thrive if they have access to the antibiotic from groundwater. At the end of the day, it’s too early to say what true impact these mosquitoes will have. With over 166,000 public signatures, a current petition clearly shows the public’s lack of support.

There is no doubt that efforts should be made in terms of greater disease control. However, where do we draw the line? We need to remind ourselves that nature will always adapt. Are we tweaking something without knowing the unintended consequences?

What are your thoughts on this controversial study?