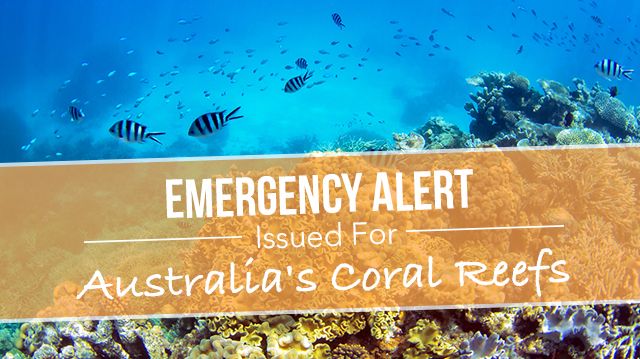 Australian scientists have raised their emergency response to level three, the highest level, after the release of a video that showed unprecedented damage to coral in the Great Barrier Reef.

The video, taken by the University of Queensland’s CoralWatch group, showed coral reefs experiencing the worst bleaching in nearly 15 years. Bleaching occurs when the reefs are exposed to warmer than average waters for a long period of time.

“A level-three response level means we’re stepping up surveys in response to the coral mortality to help us better understand the effects of various pressures on the reef and help guide management actions,” said Dr. Russell Reichelt, chairman of the Great Barrier Reef Marine Park Authority.

The Great Barrier Reef experienced bleaching events in 1998 and 2002 but the extent this year is more severe than ever. Rebecca Albright, a marine biologist with the Carnegie Institution for Science, told Live Science that 95 percent of the northern reef is showing signs of bleaching, compared to just 18 percent in 2002. Albright indicated that her organization’s current projections anticipate a 50 percent mortality rate for corals.

“Corals are sensitive to not only the anomaly in temperature — how high it goes — but also the duration of that exposure,” said Albright. “This kind of perfect storm of all these factors coming together makes this a catastrophic scenario right now.”

A spike in water temperature from the El Niño system is playing a significant role in the warming of the waters, with the strong winds of the system leaving the reefs in hotter than normal water. However, it’s not the only reason. Temperatures in the reef have been steadily rising since 1929, at a rate of 0.68 degrees Celsius per year. Surface temperatures reached their highest levels in 2012–2013. This is likely due to the impact emissions are having on the atmosphere.

In fact, researchers have said that if nothing is done to curb emissions, we could be looking at the complete destruction of one of the world’s greatest treasures by the end of this century. And since corals can’t exactly uproot themselves, they are left to suffer the consequences of rising temperatures.

Reefs can generally recover from about two bleaching events per decade, according to researchers, but if they begin to happen on a yearly basis it could lead to mass die-offs for corals that can’t adapt quickly enough. At the current rate of emissions, researchers say that all coral reefs will experience yearly bleaching by 2056.

This all sounds very doom and gloom but there are still things we can do as a planet to help save the Great Barrier Reef.

Surely it would take a massive effort to reduce carbon emissions to a level that would save the reefs. Not so, say experts. According to Jeffrey Maynard of the Centre de Recherches Insulaires et Observatoire de l’Environnement (CRIOBE), even modestly reducing our carbon footprint would delay annual bleaching until 2040, giving corals more time to adapt.

“For 394 reef locations (of 1,707 used in the study) this amounts to at least two more decades in which some reefs might conceivably be able to improve their capacity to adapt to the projected changes,” said Maynard. “More so than any result to date, this highlights and quantifies the potential benefits for reefs of reducing emissions in terms of reduced exposure to stressful reef temperatures.”

Emissions can be cut in a number of ways, but one action environmental groups are taking is to push for the cancellation of a large coal mine in Western Queensland. It is argued that the $22 billion mine is a “carbon bomb” that will push the world over the warming target that world leaders agreed to in Paris last year.

If there is one silver lining to the recent bleaching events for activists, it’s that it allowed them to restart a campaign against the mine which effectively died when UNESCO removed the Great Barrier Reef from its “in-danger” list.

“I hope these scientific findings will convince the commonwealth government to link its greenhouse gas policies to the vulnerability of the reef to climate change,” scientist Terry Hughes told The Australian.

Reducing our carbon footprint will take a global effort, but there are little things you can do right now to make a difference. For example, instead of driving to work, take a bike or mass transit. You can also do your part by planting trees and contacting legislators to encourage them to support comprehensive climate change legislation.