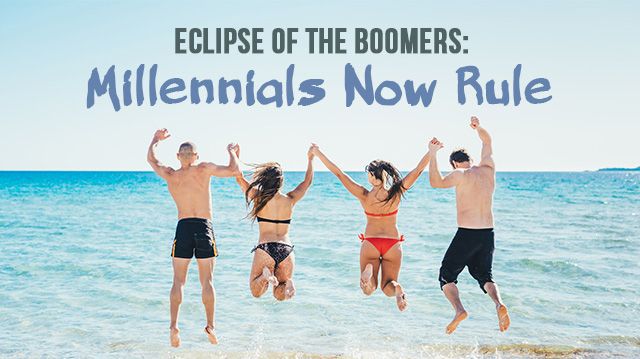 Baby Boomers, those born between 1946 and 1964, have dominated American demographics for decades. As a result, this post-World War II population has set the agenda for the nation’s political, cultural and economic landscape for quite some time.

However, a recent Pew Research Center study recently found that the Millennial generation, being people born between 1981 and 1997, have just edged out the Boomer population and are now “the largest living generation in the U.S.”

A big reason for this demographic shift is the growing number of immigrants between the ages of 18 and 24 entering the country, coupled with an aging (and dying) Baby Boomer population. At the current rate, the Millennial surge is expected to peak in 2036 with a population of 81.1 million before giving way to the next rising generation. That means two decades of a Millennial-run America are ahead of us.

So what are the implications for Millennial domination over American politics and culture? Well, the possible effects are staggering.

As a whole, the Millennial generation is very engaged in civics and politics. In fact, in 2008 the voter turnout for young adults (aged 18-29) nearly doubled from the previous 2000 election year. Millennials are also more likely to volunteer and be involved in community service than when Boomers were of the same age. This indicates that the Millennial population will become increasingly civically and politically minded, as people tend to become more engaged politics and community as they age.

With the advent of the Internet, today’s young adults are also more inclined to engage in online political debates, discussions and forums than their Boomer predecessors. This has caused them to become an informed and politically invested population. While Boomers are statistically more likely to vote and are more engaged in face-to-face civic activities, this trend is likely to shift as Boomers age and Millennials grow into adulthood. In general, Millennials are more politically and socially engaged than Boomers were as young adults.

Over the past few decades, Boomer political leanings have been split pretty equally between the Republican and Democratic parties, creating a strongly polar political landscape. While this has caused political stalemate from time to time, it has also led to a society relatively balanced between liberalism and conservatism.

Millennials, however, tend to be more liberal in their political leanings. According to Pew Research, the majority of Millennials favor a bigger government that offers more universal social services. They also are more progressive on social issues than the Boomer generation. In fact, 68% of young adults favor both gay marriage and the legalization of marijuana.

Millennials are less likely to get married than Boomers but are more likely to marry someone of a different race. This could be partly due to the large amount of younger immigrants to America, affecting Millennial views on immigration reform as well.

The question is, what do all of these statistics mean for the future of America? While no one really knows, it can be assumed that as young adults take over American politics we will begin to see a more progressive and liberal society. Frank Luntz, a top conservative pollster, says this generation is so liberal it should frighten political leaders, according to the Huffington Post.

The unforeseen popularity of Democratic candidate Sen. Bernie Sanders (I-Vt), in practice not a Democrat but a Socialist and independent, is an indication of this shift. Sanders largely represents the views and attitudes of Millennial young adults, who are excited about the notion of free college, equality and fair trade.

They are also excited about his apparent “realness,” as opposed to the polished, refined politicians of older generations. Quite an accomplishment for a 74-year-old who has been in Congress since 1990.

Perhaps this infatuation with a more Socialist-leaning society has to do with the fact that Millennials “have higher levels of student loan debt, poverty and unemployment, and lower levels of wealth and personal income than their two immediate predecessor generations (Gen Xers and Boomers) had at the same stage of their life cycles,” according to Pew Research.

Or, maybe it’s just a total disenchantment with the American Dream and the way the country has been run in their lifetime. Whatever the cause, it looks like a very different America is on the horizon.

Do you think America’s best years are ahead, considering the Millennial domination? In what ways do you see this country changing and shifting in the years to come?