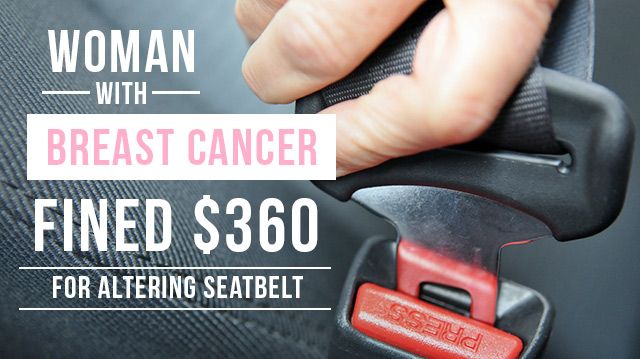 Pulled over for a random drunk-driving test, Lin Riley was instead ticketed by an unsympathetic officer for altering her seatbelt, which she did to alleviate the pain associated with breast cancer. The incident paints an ugly picture of how law enforcement can supercede common sense and even basic humanity.

“Not my problem” says officer

Lin Riley was pulled over for a random breathalyzer test. The 68-year-old woman rolled down her window to show her license to the officer and he noticed a one-inch binder clip attached to the seatbelt retractor above the woman’s right shoulder.

When the officer gave back Riley’s license, he asked, “What are you doing? What do you have on your seatbelt?” Riley told Australian news service News.com.au.

Three years ago, Riley learned she had cancer in her left breast, leading to a mastectomy. Last year, one of her implants ruptured and she suffered from significant swelling to her left side and discomfort with pressure and pain. To alleviate the pain, she placed a clip at the seatbelt retractor over her shoulder.

After explaining her situation to the officer, he said, “That’s not my problem.” He left her waiting for 35 minutes and then returned with a ticket saying, “I’ve done you a favor, and the ticket will only be for $360.” That’s in Australian dollars, about $260 in U.S. dollars.

A frustrated Riley later broke down in tears. Not only did she suffer the humiliation of having to reveal private information to an unfeeling officer, but she was also made to feel like a criminal.

Riley admits she was not carrying a doctor’s certificate proving  she had cancer, but she didn’t realize that altering the seatbelt would result in a fine. According to police, Riley had in fact broken the law because she didn’t have a medical certificate with her.

But there’s a much bigger problem here. Where is the compassion for another human being? I can’t help but wonder if it were the officer’s mother, wife or sister sitting in the car with an altered seatbelt he would not have been so callous.

“It’s just really unfortunate because the officers were so rude and not understanding of my situation,” said Riley. “When they said my health problems weren’t their problems … that really upset me, to be frank.’’

Was Lin Riley’s fine unfair? Or, was the police officer right to dole out a fine befitting an otherwise victimless crime. Perhaps he could have handled it better, with empathy. I think so.

What do you think?