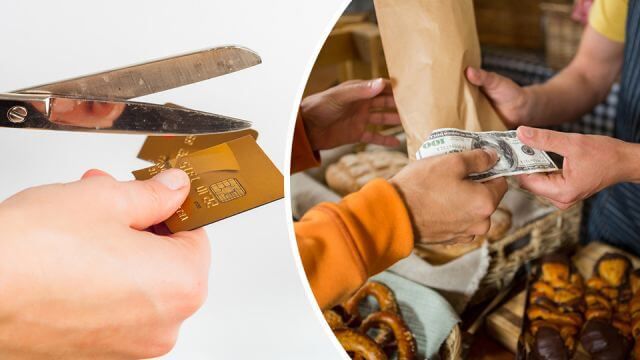 Ugh, the crazy world of credit. You don’t want to spend money that is not yours but somehow you get tangled up in the maddening world of credit cards — paying for something over time, with an exorbitant amount of interest just to satisfy an “urgent” need. I found out the hard way that once you get on the wild horse of credit, it is very hard to escape.

My journey into the black hole of debt

Like many Americans, my credit journey began with a desire to obtain higher education. Unfortunately, my first higher education experience ended badly with a boatload of student loans and no degree to wave in return. Not only was I too young and immature to take college seriously, but I was also too young and immature to recognize what being saddled with debt would do to me. I had believed the lies about student loans, such as, “Student loans are a good debt to have.” That’s BS! There is nothing good about a student loan, especially once the grace period ends.

I was stuck for quite some time in a relatively low paying job trying desperately to double up on payments to rid myself of the burdensome student loans. Eventually, the crippling hump dropped out of my life, and I moved on to once again enjoying freedom from debt. Sadly, I fell right back into the debt trap when the time came for me (or so I thought) to acquire the all American dream: my first house. After living for over ten years debt-free, it was hard for me to commit to a loan more than $120,000. After the house came, there were credit cards and more cards and layaway plans and such. At a casual glance, I looked just like any other American, swimming in a pool of debt, coming up for air but mostly being carried by a current of dependence on others.

My awakening: a near brush with death

The nightmare ended when I lay in a hospital bed after having a heart attack at just 40 years of age. I was working myself to death to keep up with the bills and provide for my family. I knew at that point that it had to end. I could no longer owe money to anyone. It was right there in that hospital bed that I felt I was being given another chance to get it right. My decision was this: I was going to do everything it took to get out from under the curse of debt.

After the hospital, I made a plan of action

After being released from the hospital, I immediately drafted a plan of action to tackle the financial burden in my life. Drastic action was taken such as selling cars, selling stuff I didn’t need and taking on a minimalist mentality. I sold a house that was too big and used money I made from it to pay off other loans. In three years of hard work and a lot of protest from my family, I was finally debt-free again.

I felt like a new man and began to construct a new plan — a cash budget plan. To me, this meant that unless I had the cash, I wasn’t going to buy anything, period. No exceptions at all. It didn’t matter what my neighbors were doing. It didn’t matter that almost every other American was living in debt; it was not something I was willing to do. Life is far too short, and I promised myself that I would never be a slave to money again!

Lessons from a strict cash budget

I have now been on a strict cash budget for seven years and have never felt better physically and mentally. There is so much liberty in knowing that I am not a part of the average American debt, which is now almost $137,000 per household. Here are some lessons I have learned through from my flirt with financial ruin and my decision to move to a cash budget.

That thing — whether it be a car, a house or even an education — is not something you need unless you can save for it and acquire it without going into debt. Looking back on my college experience, I would have been more motivated to study and finish my schooling if I had worked and saved for it rather than simply filling out paperwork for loans. Even if it had taken me twice a long to complete because of working and going to school at the same time, it would have been so much more freeing than being saddled with the debt of the loans.

I have realized that if I don’t really “need” something in the true sense of the word, I can wait until I can pay cash. Additionally, I have noticed that I actually “need” very little — and what I do need I can easily buy with a cash budget.

Although everyone does it, debt makes you a different person. Obviously, you are not free when you are in debt; you are enslaved to that debt, and it can make you feel very oppressed at times. The way most people think is that if they purchase something on credit, it will make their life better or happier — that is surely a lie. When we overextend ourselves financially, we immediately have a ball and chain tied to our waist. Any freedom we think we have is just a wolf in sheep’s clothes.

Just because you live in America does not mean you have to do things like everyone else. The beauty of this country is that you can carve your path. Be unique, celebrate financial freedom and don’t feel pressured to keep up with your neighbors. My dream may not look like anyone else’s, but it belongs to me… that is worth something!

Having to save up for stuff has cultivated patience in me that has birthed respect for what I have. I take better care of my things and don’t take anything for granted, knowing that I worked hard for it.

Learn how to budget

One other thing that I learned from exercising debt from my life is that you have to learn how to budget what you have very well. I am now good with numbers like I have never been before. I seem to be able to make that last dime stretch a long ways. Who needs a business class when you can just do life?

If you are feeling burdened by credit and would like to experience the freedom of moving towards an all cash budget, it is time to step up and step out. You will be a new person for the experience. I know that I am!