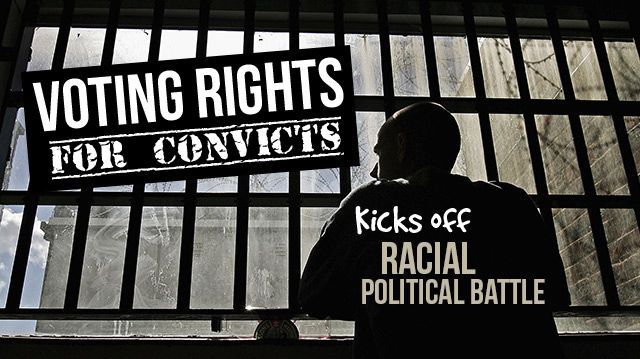 On April 22, Virginia Gov. Terry McAuliffe pulled a President Obama and issued an executive order that bypasses a Republican-majority state congress that has repeatedly killed many of his proposals. With the order made this April, McAuliffe restored the voting rights and civil rights to around 206,000 nonviolent and violent felons who have served their time.

McAuliffe’s order overturns a law that’s been on the books since 1902, one designed at the time to disenfranchise African-Americans, a larger percent of the prison population then and now. Under the order, felons who have served their sentence and met parole or probation requirements will be eligible to register to vote like anyone else. The subject is highly controversial, and Virginia isn’t the first state to make similar legislative or executive decisions.

Maryland Gov. Larry Hogan recently vetoed a proposal similar to McAuliffe’s order. Unfortunately for the Republican governor, the Democrat-controlled state legislature overrode him in February. Now around 44,000 former felons in the state have had their voting rights restored. More recently, Kentucky’s newly elected Republican governor, Matt Bevin, overturned his Democratic predecessor’s measure that restored voting rights to former prisoners. It looks like this is a pretty divisive issue, and that divide is right down the middle of the political aisle, with Democrats being largely in favor of restoring this civil right to men and women who have served their time.

“Those who have paid their debts to society should be allowed full participation in society,” Virginia Republican Party Chairman John Whitbeck said. “But there are limits.” According to Whitbeck, Gov. McAuliffe is wrong to restore all voting rights to all former prisoners, even to those who “committed heinous acts of violence.” News flash, Mr. Whitbeck, “full participation in society” means being able to vote.

Is the real problem that Republicans are afraid that former prisoners will vote for their opponents in the Democrat party? Possibly. Will this continue to be a battle between the parties? Likely.

The more important aspect of McAuliffe’s move this April is that the order “marks an exorcism for one of Jim Crow’s last vestiges in Virginia’s state charter,” to quote The Atlantic’s Matt Ford. Jim Crow laws designed to maintain the effects of segregation were primarily enacted in the Southern and border states, starting in 1877 and extending to the mid-1960s.

These laws were responsible for the deep divide between African-Americans and white Americans. As Ferris State University’s Jim Crow Museum describes on its website, Jim Crow laws were more than just pieces of legislation; they created a way of life in which blacks were inferior to whites. Some preachers even taught from the pulpit that whites were the “chosen people,” while blacks were destined to be their servants.

Some aspects of the Jim Crow system included:

As Ford points out, the disenfranchisement of people with criminal convictions was added to Virginia’s state constitution in 1902, which was, as he states, “explicitly drafted and ratified to destroy black political power in the Old Dominion.”

When the 1902 state constitution was ratified, John Goode, the president of the constitutional convention — and a former Confederate colonel — said, “The safety and perpetuity of our free institutions depend upon the purity and inviolability of the ballot.” Goode also argued that because blacks had “just emerged from a state of slavery,” they had “no experience in the duties of citizenship” and no education, implying that they were unfit to vote.

Democratic supporters of Governor McAuliffe say that he has finally righted a wrong that has been on the books for far too long.

There’s something to be said for restoring the voting rights of former felons. Giving them the opportunity to vote delivers the message that the rest of society still views them as human beings with civil rights. It also gives them a better chance at starting over and doing something good in the world. It is, in its own way, a form of offering rehabilitation to the former prisoners and, some would argue, a very progressive and positive move in the right direction.

Do think voting rights should be restored to felons?