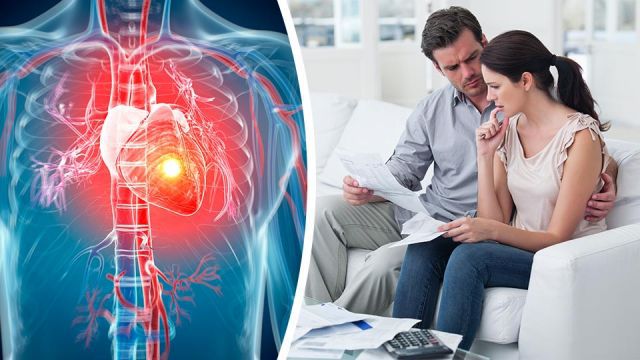 Everyone knows stress can be terrible for your health, but recent research suggests not all stress is created equal. In fact, one type in particular could make you far more likely to suffer a heart attack. So which is the worst source of stress? Stress caused in the workplace, or perhaps the kids? What about stress over the news, or could it be relationship strain? Before you get too stressed about trying to guess which one it is, the answer is actually pretty obvious: money.

That’s right, according to researchers at the medical school at the University of the Witwatersrand, South Africa, your financial problems could literally kill you. “Significant financial stress is associated with a 13-fold higher odds of having a heart attack,” stated the group of researchers that carried out a study looking at links between stress and heart problems.

Presented by the European Society of Cardiology at the 18th Annual Congress of the South African Heart Association, the study looked at heart attack patients at a major hospital in Johannesburg and assessed their stress levels. “Our study suggests that psychosocial aspects are important risk factors for acute myocardial infarction [heart attack],” concluded Dr. Denishan Govender, an associate lecturer and lead author of the study.

The study was relatively small and included just 212 participants. Half were hospitalized and recovering from recent heart attacks. The other half were a control group of other patients at the same hospital, but with no serious heart problems.

The researchers found an overwhelming majority (96 percent) of the heart attack patients had reported significant levels of stress in the month leading up to their hospitalization. Around 40 percent reported severe levels of stress. Different stress levels were determined using the Likert scale to categorize and compare the individual experiences of each patient.

Patients in that last category were the only ones to experience the whopping 13-fold increase in heart attack risk, though researchers noted any stress can be bad for your health. In particular, the second most notable source of stress was the workplace. According to the study, patients with “moderate or severe work stress” are 5.6 times more likely to have a heart attack than those with “minimal or no stress.”

However, even at the higher end of the spectrum, work-related stress was barely half as dangerous for your heart as financial woes. The authors argued the results should be a wake-up call to patients and doctors alike, particularly general practitioners. According to Govender, stress should be put on the same level as cigarette smoking during routine check-ups.

“Few doctors ask about stress, depression or anxiety during a general physical and this should become routine practice, like asking about smoking,” he said. “Just as we provide advice on how to quit smoking, patients need information on how to fight stress,” he argued.

Almost three-quarters of Americans suffer some kind of financial stress, according to a 2015 study by the American Psychological Association. That same study found over one in four American adults suffer financial stress “most or all of the time.”

“The Great Recession may have officially ended, but most American households face stagnant wages and increasing debt — many Americans are actually considered to be poorer than they were a decade ago,” researchers noted, after finding financial problems aren’t just making us sick; they’re also making it harder for us to deal with being sick.

While a third of participants admitted money problems made a “healthy lifestyle” difficult or impossible to maintain, one in five said they “considered skipping (9 percent) or skipped (12 percent) going to the doctor in the past year when they needed health care because of financial concerns.”

Back in South Africa, Professor Pravin Manga said prevention and psychological health care is better than trying to cure the plethora of problems that can crop up down the track. “There is growing recognition that many developing countries are experiencing an increasing prevalence of chronic diseases of lifestyle such as myocardial infarction [heart attack],” Manga said.

“Our study shows that psychosocial aspects are an area of cardiovascular prevention that deserves more attention,” he stated.

How to handle stress

If you’re suffering from high levels of stress, the U.K.’s National Health Service has a helpful checklist of ways you can improve your mental health.

Some of the highlights include taking on an exercise regime, or finding people you can confide in. If that doesn’t help, try reading over this long list of scientifically proven ways to lower stress levels. It likewise includes some obvious behaviors like meditation, art and music. However, it also features some other less orthodox but reliable ideas, such as sex, self-hypnosis and chewing gum (presumably not at the same time, though). If you’d rather something stronger than gum, in low doses marijuana is also proven to reduce stress, while psilocybin (the active ingredient in magic mushrooms) has also been shown to reduce stress and depression while improving overall mood.