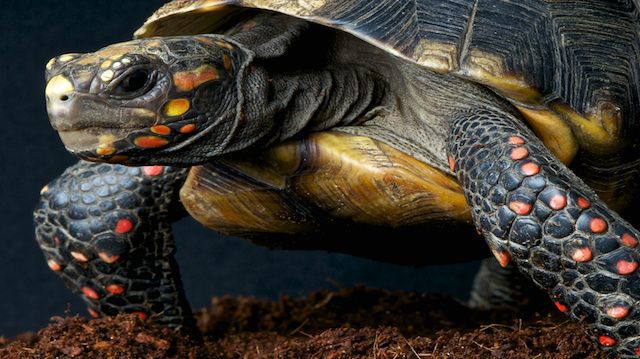 Losing a family pet can be a traumatic experience, whether that pet is big or small, furry or scaly, finned or shelled. In 1982, this saddening event befell the Almeida family of Realengo, Brazil, when their pet Manuela, a red-footed tortoise, went missing.

When the Almeida family lost Manuela, their home was undergoing renovations. Because the family could not find their beloved tortoise, they assumed she had crawled through a door left open by construction workers and gone into the nearby forest. Years went by and there was no sign of Manuela.

However, the Almeidas never suspected that Manuela was among them all along.

In 2013, Leonel, the father of the family, passed away. Upon the news of their father’s death, his children came back to the home to help clean up. Leonel had a habit of picking up and keeping various items that he found on the street, and he had a highly cluttered storage room in the upstairs part of the house. It was filled with furniture, broken televisions and boxes.

When Leandro Almeida, Leonel’s son, went to the front of the house to throw away a box of broken records, a neighbor noticed a refugee tortoise hiding inside and asked Leandro if he planned on disposing of the tortoise. What a shock the Almeidas received that day Manuela was found: She had been hiding in the storage room for over 30 years.

So how did a tortoise manage to survive for over three decades in a cluttered storage room? The Almeidas hypothesize that she dined on the termites that were likely all over the old furniture. Tortoises have a knack for survival; according to scientists, turtles and tortoises have been around for 220 million years.

Also, according to professor and veterinarian Jeferson Pires: “Despite the adverse conditions, they [tortoises] can go a long time without eating … they can go two to three years without eating. In the wild, they eat fruits, leaves, feces and dead animals.”

In the wild, a tortoise’s hard shell protects it from predators. Tortoises are closely related to turtles, but while turtles live in water, tortoises live on land. These creatures vary widely in size: Some are only a few centimeters wide, while others, such as giant tortoises, can grow to over six feet wide. Manuela is a relatively small tortoise, about the size of a shoebox.

These creatures also live a long time. Many live approximately the same length of time as humans, although some giant tortoises have lived to be over 150. Unfortunately, many of these creatures are endangered. According to the International Union for Conservation of Nature and Natural Resources (IUCN), turtle and tortoise populations are in trouble.

Dr. Anders Rhodin, chair of the IUCN Species Survival Commission’s Tortoise and Freshwater Turtle Specialist Group (TFTSG), states: “Turtles are in serious trouble. They are some of the world’s most endangered vertebrates, more than mammals, birds or even highly endangered amphibians. Half of their species are threatened with extinction.”

If you find a tortoise and don’t know where it belongs, one step to take is to call the American Tortoise Rescue, a nonprofit organization focused on the preservation of tortoises in America. Regarding their mission, the group’s website explains: “We offer permanent sanctuary to abandoned and lost tortoises though we no longer do adoptions. Special needs turtles and tortoises that cannot be placed stay in the care of American Tortoise Rescue for the remainder of their lives.”

We are so glad that Manuela was found by her family and that we were able to learn more about these amazing creatures!