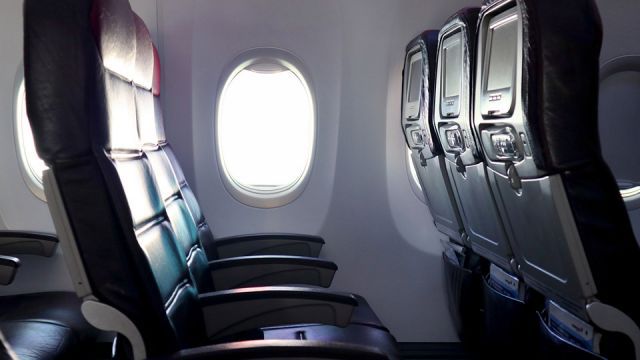 For many weary travelers, coming down with a cold after a long flight is par for the course. That’s because airplanes are the perfect environment for spreading viral infections. In fact, with more than three billion passengers flying each year, studies suggest that infectious disease spreading on flights is quickly becoming a global health concern. But, fear not. There is a common route for germ transmission according to research. So, staying in the know before your next flight could mean avoiding nasty bugs. And it could be as simple as knowing where to sit.

Why do we get sick after taking a long flight? The obvious answer is hundreds of people coughing, sneezing and breathing, while crammed together in a pressurized metal tube. That said, the International Air Transport Association (IATA) claims that the overall risk of contracting a disease from someone who is ill on a plane is just as likely to happen on a bus, subway or movie theatre — basically anywhere where a person is in close contact with others.

But, they go on further to suggest that the risk on airplanes is probably lower than in many confined spaces because modern airplanes have cabin air filtration systems equipped with HEPA filters. In-cabin HEPA filters can get rid of 99.9995 percent of germs and microbes in the air. Plus, cabin air is only half recirculated air. Therefore, the other half is fresh air pumped in from the outside.

Nevertheless, there’s no denying that a nasty bug can take hold shortly after a flight. Which means, HEPA filters don’t entirely rid the cabin environment of germs. A study published in Science Direct found that commercial airlines are, in fact, a favorable environment for spreading pathogens carried by passengers or crew, and could potentially even start pandemics.

The bottom line: if a passenger beside you is sick, then there’s a good chance you will pick up those germs via sneezing, coughing or germy surfaces.

Researchers from Emory University and the Georgia Institute of Technology investigated what the likeliest “routes” may be for germs transmitted by someone coughing or sneezing in an airplane. The study, published in the journal PNAS, discussed how you can take steps to prevent contact with harmful germs. And that could mean enjoying your vacation without having to nurse a nasty head cold!

Researchers recorded behaviors and movements of individuals in the economy cabin on single-aisle aircrafts during ten transcontinental U.S. flights (eight taking place during influenza season). By observing the position and movement of passengers, they came up with a “map” of germ transmission. Researchers monitored the movements of passengers and cabin crew, noting which people were likely to be most active and how individuals were positioned relative to an ill passenger on board. Over 200 air and surface samples were taken on all the flights.

It turns out, the most common behaviors for passengers were waiting for, using or exiting a bathroom. Interestingly, the wait for the front bathroom was nearly twice as long as for the back bathroom.

So, what can we do to avoid getting sick?

Your highest chances of catching a bug may actually come from cabin crew, who move around more often and come into prolonged contact with more passengers. The study reports that each crew member comes in contact with passengers for approximately 67 minutes, making it likelier that a flight attendant could give you more than a complimentary bag of peanuts. Researchers estimate that a germ-carrying crew member will infect 4.6 passengers on a given flight.

Additionally, researchers discovered that sitting within a three-row radius of another sick passenger can increase your chance of catching their cough, cold or flu by 80 percent. But, you can minimize the danger by exercising good hand hygiene, and of course, by keeping your hands away from your nose and eyes.

And, when it comes to choosing the right seat…

Sure, the aisle seat may be easier to move in and out of, but it’s also the seat that comes in contact more often with germ-caring individuals who move about the cabin. In fact, the average number of contacts is greatest for those in aisle seats, less so in middle seats and least in window seats reports the study.

All in all, airplanes aren’t really as germ-ridden as we may think. Unfortunately, though, if you’re sitting more than three rows away from a coughing and hacking passenger, then you’re in a germ zone. However, you can improve your chances of not getting sick by choosing a window seat. Safe travels!