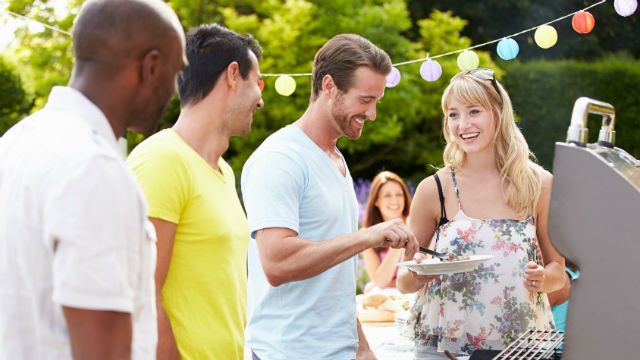 Summer is practically synonymous with barbecues. Unfortunately, grilling also comes with a number of health and safety risks. What’s the best way to protect yourself and still enjoy all of the fun and deliciousness barbecuing can bring?

Grilling meats at very high temperatures naturally produces what are known as HCAs (heterocyclic amines), which are also found in cigarette smoke. They are created from a reaction between two compounds that are naturally found in any meat: creatine and sugar.

Some people are under the impression that only the charred areas of the meat are a problem, but any portion of well-done meat is said to contain 3.5 times more HCAs than medium-rare meat. Keep in mind that grilled veggies don’t contain creatine, so they don’t form any HCAs.

Using a homemade teriyaki marinade sauce on meats can help reduce HCAs by as much as 67 percent, according to the Cancer Research Center of Hawaii. On the other hand, processed, commercial barbecue sauces that are packed with sugar can triple the amount of HCAs. Marinades that contain herbs from the mint family like basil, mint, rosemary, sage, savory, oregano and thyme have been found to be especially helpful in decreasing HCAs.

Another issue with grilling is the potential for food poisoning. According to the Centers for Disease Control and Prevention, about 48 million Americans get food poisoning every year, most often from eating undercooked meat, poultry, and other animal products.

If meat isn’t cooked to a high enough temperature to kill bacteria, they end up in the intestinal tract, leading to symptoms like vomiting, diarrhea and stomach cramps. In most cases, it’s mild, but about 128,000 people require hospitalization and 3,000 die of foodborne illnesses each year.

Cook your meat thoroughly. Even if it looks done on the outside, it could be raw on the inside – and looking at its color isn’t necessarily a reliable way to tell if it’s cooked. To be sure, get a food thermometer and use it to check the internal temperature.

Keep meats separated from other foods such as fruits and vegetables and anything you’ll eat without cooking in order to avoid cross-contamination. Raw meats should be cut on a different surface than other foods. Everything that has touched raw meat, such as plates, utensils and the cutting board should be washed thoroughly with hot, soapy water.

Be sure to store meat and poultry in the refrigerator until it goes on the grill. Any leftover meats should be put into the refrigerator within two hours, or one hour if the outside temperature is above 90 F.

According to the National Fire Protection Association, gas grills have been involved in a yearly average of 7,200 home fires, while charcoal and other solid-fueled grills were the cause of an annual average of 1,400 home fires.

To prevent the risk of fire and/or serious injury, never use your grill indoors and be sure to set it up far away from deck railings, siding, branches and out from underneath eaves. Keep children and pets at least three feet away from the grill at all times – and keep the grill a safe distance from any play areas. 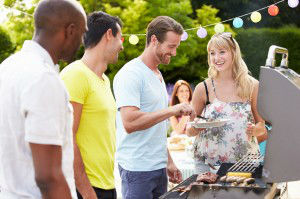 Never spray charcoal lighter fluid onto an open flame or hot coals, and try to avoid a big fire. Aim to burn just enough fuel to cook your food.

Grilling can be fun and safe by keeping these tips in mind this summer, and always.