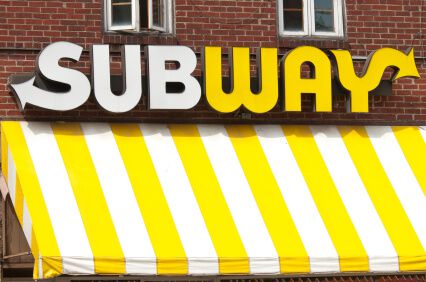 If you consider Subway to be a healthier option than McDonald’s and other fast food chains, think again. Subway’s new Crunchy Chicken Enchilada Melt is certainly filled with unsavory ingredients, in fact, Subway has never been truly healthy.

Subway has tried for years to market themselves as a healthy choice in the fast food world, touting the ‘Eat Fresh’ slogan. Their marketing success in this venture was accelerated in 1998, when Jared Fogle lost over 200 pounds eating an all-Subway diet of a 6 inch turkey sub for lunch, a foot-long veggie sub for dinner, plus baked chips and diet soda.

While Jared was indeed successful in going from 425 pounds to around 200, and has made millions of dollars from Subway as a spokesperson, he may unfortunately still see detrimental health effects from his diet choices down the road. Processed meat, such as the processed turkey in his subs, has been shown to be one of the most dangerous foods in existence.

The refined sodium in his chips, and the aspartame in his diet soda, also come with an array of potential dangers, including heart disease. Subway also uses commercially-raised meats, filled with growth hormones, as well as commercially-grown veggies laden with pesticides. As reported by Fox News, one six inch loaf of Subway’s Roasted Garlic Loaf has more refined sodium than 14 strips of bacon – 1,260 milligrams.

Earlier this summer, Subway introduced a new test sub into some of their franchises across central Florida and downtown Seattle. The Crunchy Chicken Enchilada Melt contains, along with shredded chicken, cheddar cheese and enchilada sauce, Fritos corn chips. According to Food Freedom, a lawsuit was filed against Frito-Lay in 2011 for claiming that their products were all natural with no synthetic ingredients. In fact, the chips are made from genetically modified corn and soy.

A UCLA study of 97 adolescents found that the teens surveyed ate approximately the same amount of calories during visits to Subway and McDonald’s. Dr. Lenard Lesser, the study’s lead researcher, says, “there was no statistically significant difference between the two restaurants, and that participants ate too many calories at both.” He added that Subway’s food contained, “three times the amount of salt that the Institute of Medicine recommends.”

Does this sound like health food to you? It would be unwise to follow in Jared’s footsteps. While he may have lost a lot of weight, he is not setting himself up for optimal health by ingesting processed, potentially dangerous ingredients. Your best option: make your own, truly healthy, organic meals at home: it is the best way to actually ‘eat fresh.’