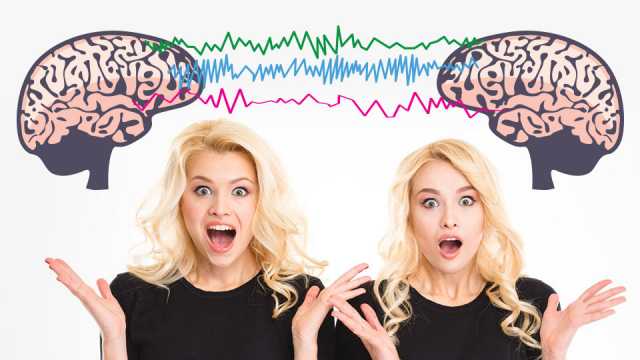 Twins appear to share a special bond that most of us can scarcely imagine. To begin with, they typically spend about nine months in the womb together. Ultrasound, sonograms and other imaging technology show that twins try to and reach out and touch one another while they are in their mom’s belly.

After birth, researchers have noticed twins try to interact with one another just a few hours after delivery. As a result, scientists believe that twins are hard wired to be exceptionally compatible with each other.

Indeed, some of the traits twins exhibit border on the amazingly weird. For example, there is a phenomenon known as cryptophasia, which involves twins that invent their own shared language, which no one else can understand. Then, there is a mind-bending form of telecommunication, which conjoined twins can exhibit. Indeed, the more you learn about twins the more incredible they seem to be. Here are five really weird phenomena involving twins that you probably never knew about.

Linguists informally refer to it as “twin talk” or “twin speak,” but apparently at least 40 percent of twins really do have their own language. This can be a form of idioglossia, which is a type of gibberish that no one else can understand.

Authors Denise and Heather Allan (who are themselves identical twins) explain this strange phenomenon as follows, “We speak to each other in a language no one else can understand, nor can we enlighten them. We didn’t realize this until we were 6 or 7 years old when someone pointed it out.”

You can check out this most unusual form of communication for yourself, which shows two toddler twins gabbing away with their own lingo in this now famous viral video.

Genuine mind reading has been hard to scientifically verify. However, researchers may have hit on a real-life form of mental telepathy, which involves a pair of conjoined twins named Krista and Tatiana Hogan.

Unlike most twins, Krista and Tatiana are joined at the head so that their skulls merge. According to neuroscientists, twins exhibiting craniopagus are exceedingly rare and very few that are born survive. But these young girls are mobile and active enough that they can lead relatively normal lives.

Amazingly, Krista is able to identify objects that only Tatiana sees and vice versa. For example, researchers can blindfold Krista while showing her sister, Tatiana, a furry teddy bear, which Krista can identify.

Neurologist Douglas Cochrane believes the telepathy the twins experience is explained by a structure he calls a thalamic bridge, which refers to connective neural tissue that links the thalamic region in each girl’s brain. Scientists believe the thalamus is the brain’s switchboard and is instrumental in processing sensory information, relaying it to other cortical regions, and being a key part of the neural loops that produce consciousness.

Krista and Tatiana are two girls with two brains, but in some sense, their minds seem to merge. As Cochrane and other researchers note, the sensory input that one girl receives appears to cross over the bridge into the brain of the other. In other words, “One girl drinks, another girl feels it.”

You can see the amazing telepathy Krista and Tatiana appear to have by checking out this incredible video.

Nature vs.nurture has been a perennial debate. Longitudinal studies involving twins separated at birth provide scientists an opportunity to study which is more important when it comes to personality development: genes or upbringing.

Twins raised apart— particularly identical twins — seem to bolster the centrality of genetics when it comes to temperament and personality. For instance, the Minnesota Center for Twin and Family Research conducted a study examining identical twins who received entirely different upbringings. One of their most striking cases involved a pair known as the “Jim Twins.”

These two boys were adopted by separate families when they were just one month old. By coincidence, both ended up being named James. But that was just the beginning of some amazing correspondences:

Dr. Thomas Bouchard, who extensively studied their case, found that their brain waves (which are normally quite distinct in most people) were virtually identical. Time and again, twin researchers are continually amazed by how often identical twins raised separately lead parallel lives.

In 2002, the BBC reported one of the strangest accounts of twin brothers who met their untimely endings under similar circumstances on the same day. Both were killed in completely separate incidents, but on the same road in close proximity just a few hours apart.

As the police officer on the scene noted, “This is simply a historic coincidence. Although the road is a busy one, accidents don’t occur every day. It made my hair stand on end when I heard the two were brothers, and identical twins at that. It came to mind that perhaps someone from upstairs had a say in this.”

This one is a little creepy too, but in 20 to 30 percent percent of multifetal pregnancies, one of the twins vanishes. This phenomenon was first noticed in 1945 and is referred to as fetal resorption. Medical experts suggest that “intense fetal competition for space, nutrition or other factors during early gestation” causes one twin to absorb the other.

For example, in 2015, ABC News reported that a baby girl born in Hong Kong had a growth inside her, which appeared to be the remains of her absorbed sibling. Talk about double trouble.