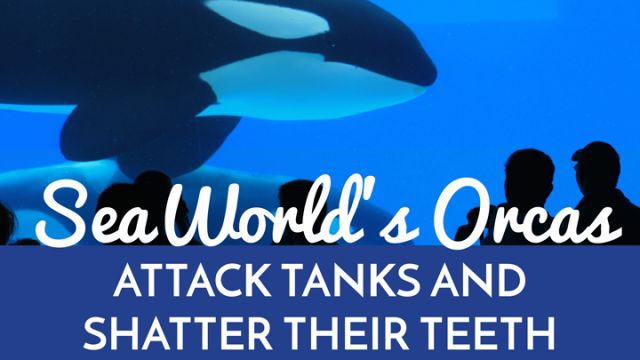 From time to time, everyone experiences some sort of dental pain in their life. But for SeaWorld’s captive orcas, who live with mouths full of shattered teeth ravaged by concrete and metal, dental pain is not only severe, but a daily way of life. Someday they may even succumb to infection.

It’s well known that SeaWorld’s orcas living in captivity — both in the U.S. and abroad — chew on the concrete and metal walls of their tanks because of frustration and boredom. Yet, captors of these beautiful creatures refuse to admit that the animals are suffering daily under their care.

Photos released by the Free Morgan Foundation, a group cofounded by noted orca expert and marine biologist Dr. Ingrid Visser, show just how severe the damage is and how quickly it has happened.

“The images of the teeth in the report speak for themselves,” researchers wrote. “They are graphic, indisputable and universally recognizable as ‘painful’ to any human who has had a cavity, chipped, broken or lost a tooth, or had a tooth drilled by a dentist.”

The orca’s dental problems may seem superficial, but in reality, they can quickly become life threatening. Stressed and bored orcas compulsively gnaw on their tanks daily, which wear down their teeth, exposing pulp. Just like the teeth in your mouth, if exposed to pulp, deadly infection could easily take hold. Teeth are then drilled, similar to root canal, but without anesthesia. The result is a lifetime of pain and discomfort for the orcas, both from the initial wear and ongoing daily dental care, as well as the eventual collapse of the teeth.

The most apparent and startling damage is that of Morgan’s teeth, a 9-year-old female orca who was spotted swimming off the Dutch coast in 2010. At the time, she appeared to be ill, and was captured by the Harderwijk Dolphinarium on the grounds of rehabilitating her and then releasing her. But, instead of returning her to the wild, Morgan was transferred to Loro Parque in Spain through a series of shadowy moves, which critics describe as “orca laundering.” While SeaWorld claims ownership of her, she lives with five other orcas that SeaWorld loaned to the park.

The posted photos show just how severely Morgan’s teeth have been damaged in under four years of captivity. When she was captured, the orca had a complete healthy set of pointed teeth, as is normal for wild orcas. As of this past April, several of her front teeth were nearly missing from the wear and damage occurred in captivity.

On the park’s website, SeaWorld claims that damaged teeth are natural for orcas.

“Killer whales, like all toothed whales and dolphins, develop worn teeth,” they write. “And just like our killer whales, it’s a result of exploring and manipulating things in their environment.”

But you can clearly see from the photo that Morgan’s teeth are stained with blue paint — something that would never occur in a natural environment.

Let us know how you feel about orcas in captivity. If you’re against the practice, as many people are, then send amusement parks like SeaWorld a strong message suggests The Free Morgan Foundation, in a way that hurts their wallets — by not buying tickets!