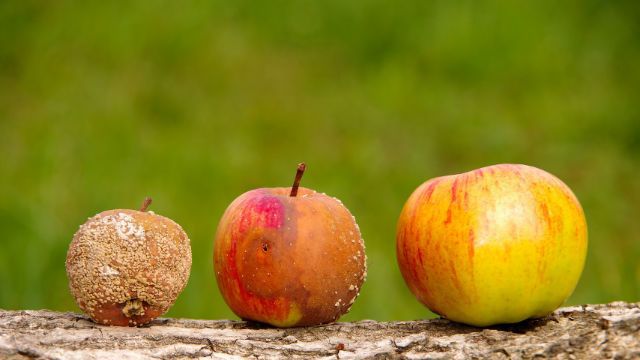 The media has recently been ablaze telling of the USDA approval and upcoming arrival of the GMO “Arctic” apple – a Frankenstein creation altered to… not turn brown when sliced. This purely cosmetic technology is planned to be applied to cherries and pears as well.

This leaves us with a pressing question: What’s so good about a piece of fruit that won’t rot? It would seem that there would be many more harms than benefits to this modification – even if it were found to be safe to the environment and humans (and thus far, no long-term studies exist to prove that).

According to the nonprofit watchdog organization Food and Water Watch:

“The particular gene targeted by this technology allows the apples to be sliced without turning brown, which could mislead consumers into thinking they are eating fresh apples when they might be eating apples on the verge of rotting. Browning is an important indicator to consumers in determining the freshness of an apple or apple slice.”

“The silenced gene is also heavily involved in a plant’s natural defense against pests and pathogens, which could lead to trees that are less healthy than non-GMO apples and rely on more chemical treatments to ward off pests and disease.”

That’s right, not only could you bite into a fresh-looking apple and taste something that’s virtually rotten, some experts hypothesize that suppressing the polyphenol oxidase (PPO) gene, which is what is being done to the Frankenapple, the nutritional content could be compromised as well.

If this is done to cherries and pears as well as apples, that’s three of our most popular, healthiest fruits being deformed away from nature… and likely health.

Rotting is a natural process. It is an indicator of freshness, of time and of quality. With a few rare exceptions (such as honey), real food will eventually rot. Meat and produce generally rot faster, while dried legumes and grains such as rice will stay around for a while… but they still rot eventually.

Processed foods, on the other hand, rot very slowly – or sometimes do not rot at all. Some go bad, but in disgusting, unnatural-looking ways that make us question whether or not there’s food inside those packages. That’s a good question, because these preservative-laden, chemically processed wares barely resemble the real food that our bodies need.

With the rise of genetic modification, some of our most prized natural foods may soon more closely resemble something processed, and that’s just not okay.

If we mess with Mother Nature’s natural processes, and allow ourselves the hubris of thinking we can produce our food better than she can, we’re in for a rude awakening. Rotting is a natural and healthy process, and eliminating it from the genes – well, we’re predicting some problems.

Of course, we all have a choice – don’t buy GMO, don’t buy processed food. Vote with your dollar and stick to the real stuff, if you wish to keep it available and unmodified.