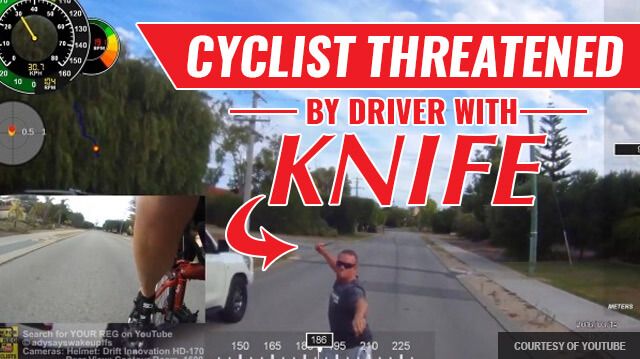 In a frightening exchange this weekend, an Australian cyclist was involved in a road rage incident that could have — but thankfully didn’t — become bloody. The unidentified 45-year-old cyclist was traveling down a quiet road in the Perth suburb of Warnbro when a man in an SUV attempted to get ahead of the cyclist at a traffic circle.

In a video recorded from the cyclist’s helmet and bike, the driver of the vehicle is shown driving excessively close to the cyclist. So close, in fact, that the bike clipped the front of the vehicle. Understandably, the cyclist shouted out, “What the f— are you doing?” before riding on.

What happens next is chilling. The video shows the driver speeding past the cyclist and then stopping ahead of the bike. The driver of the vehicle then gets out, stands in the middle of the road, and holds up a large rope-splicing tool — think hand-held spear — using it to threaten the cyclist. He appears to be ready to throw the knife.

Of course, words were exchanged. The driver of the vehicle shouts: “You f—ing d—head, you f—ing touched my car. F—k off, you pull out…you’re a f—ing idiot.”

The cyclist jumps off his bike and backs away, holding his hands up. He utters apologies and is probably just wondering what he has to do to keep the guy from killing him.

“I could charge you for that you piece of s—t,” the driver says, walking towards the cyclist, before he gets back in the car and drives away.

The cyclist turned the footage over to Western Australia police the next day. The driver was arrested and charged with carrying a weapon in public and received a $1,500 fine, without jail time.

Road rage is on the rise: From 2010 to 2013 incidents doubled in some places around the United States. According to the National Highway Traffic Safety Administration, 66 percent of traffic fatalities are caused by aggressive driving, and 37 percent of “aggressive driving incidents” involve a firearm.

In Australia, the National Roads & Motorists’ Association found that more than 70 percent of drivers have been victims of some form of road rage.

Stay safe out there! If in doubt, absolutely keep your distance.