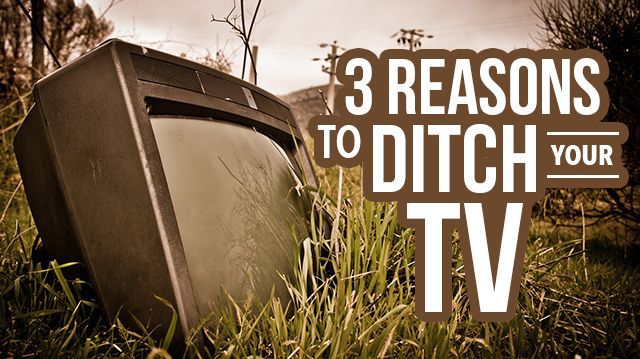 Ever since the introduction of the television to America in 1928, Americans across the country have eagerly gathered in front of the mind-sucking box to waste away hours and fill their minds with advertisements.

Children have grown up with the TV acting as a babysitter, falling asleep to their favorite program, throwing tantrums when it’s turned off. Teenagers harbor those days of mindless television poison. They have televisions in their rooms, on their smartphones and are constantly plugged in, eyes glazing over from hours spent in front of the tube.

Adults are not immune to the influence of TV in the home either; they are tuned into the news, the sports, the reality shows, using the television as a distraction and time-waster. The average American home has more televisions than people, if we honestly can’t find anything better to do with our extra time, then there is something very wrong with the American ideal.

Though it may seem harmless, time watching television adds up, hours turning to days, days turning to weeks in a lifetime. Imagine what you could do if you put all this time toward something productive, something that will improve your quality of life and happiness, not a colorful screen that sucks away your energy. Here are just a few of the many reasons to get rid of your television and never look back.

It’s Tuesday night, you settle in to watch your favorite television program. Having picked up a bag of greasy chips from the store to snack on, you are ready to go. Before you know it, your hand is coming up empty. Just crumbs left in the bottom of the oily bag. You suck your fingers clean, trying to savor that last bit of artificial flavoring.

Americans, as a rule, are fat. And getting fatter! The obesity epidemic is not just something that happens to you; you can consciously choose to eat well and exercise. But hours spent watching TV harm your motivation for a healthier lifestyle. Snacks and TV just go so well together — something to keep your hands busy while your mind is engrossed in the show. You have to be very aware of the food you are putting in your body. Instead of grabbing a microwave meal from the freezer and plopping down in front of the television set, actually think about what you are eating. Focus on your food and take the time to cook a healthy meal instead of watching TV.

Sitting is the silent killer. Women who sit six hours a day are 40 percent more likely to die early than women who only sit for three. Talk about one scary statistic! Some sitting can’t be helped, jobs often require hours of sitting per day. But don’t diminish your likelihood of living a long healthy life by being even more inactive once you get home! It’s been proven over and over, sitting for long periods of time causes your muscles to become weak, for you to quickly become overweight, and sapped of all energy and motivation. Is TV really worth this damage to your well-being?

Though it seems like it should be self-evident, obsessive TV watchers aren’t productive. Time that could be spent with your family, reading a good book, or learning something new, is instead spent zoned out on the couch. Watching television for hours does not enrich your life in any way, not to mention that TV shows are incredibly addicting and are hard to give up once hooked. The average American watches television for 34 or more hours per week. That’s more than an entire day of your week doing absolutely nothing! Dedicate that time to helping others and improving your mind and your health.

Sometimes it’s fine to let go, kick your shoes off after a long day at work and watch a show; there may be benefits to mentally escaping the trials and toils of everyday life. But make sure you are aware of the hours you spend plugged into your television set. Be educated about the dangerous consequences of your unhealthy habit and decide: Is it really worth it?

Are you ready to ditch your TV?

Taylor lives in the mountains of Arizona where she enjoys an active lifestyle including hiking, horseback riding, kayaking and backpacking. She is a Certified Wilderness First Responder and spends a great deal of time educating others on how to enjoy the wilderness safely. An avid reader, writer, photographer and blogger, Taylor believes that being active and spending time in nature are essential to good health.