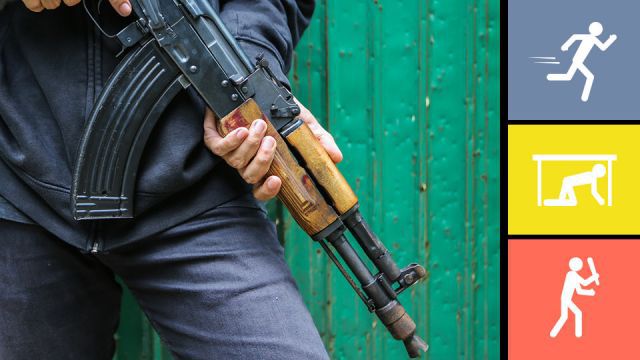 The chances you and your loved ones will ever face a mass shooting are rare. Nevertheless, the heartbreaking news that a lone gunman killed at least 50 people by opening fire with a semi-automatic weapon at a country music festival in Las Vegas is a reminder that we live in very uncertain times. Increasingly, people are asking what steps they can take if confronted with this type of event. Experts have been weighing in and here is a summary of their advice:

1. Prepare mentally ahead of time for these events

No one likes to think about disasters, but your odds of surviving a fire, natural calamity or mass shooting improve if you develop an action plan ahead of time. This means identifying exits and thinking about escape routes in advance.

It also means visualizing how you’ll respond in the event of a shooting situation. Most people naturally freeze up, but experts caution that doing nothing is usually the worst “decision” you can make. Instead, be prepared to follow a course of action. The following template can help you cope with ambiguous and potentially perilous situations:

When most people hear gunfire, their natural reaction is to crouch and stay in place. Every situation is unique, but experts agree that the best course of action is to run away from the source of the gunfire and towards the nearest exits. Encourage others to follow suit. One caveat: primary exits can sometimes create a bottleneck, which shooters can try and take advantage of, so be aware.

Generally speaking, avoid running into bathrooms or parts of a building where you could get trapped. As Pete Blair, executive director of the Advanced Law Enforcement Rapid Response Training Center, which is based at Texas State University, notes “When you go somewhere, you don’t want to put yourself in a situation where if you get found, you don’t have any options.”

Specifically, look for side doors, patios, decks or even second story windows, which you can jump out if necessary.

3. If you cannot flee a building, barricade yourself in a room

If you cannot find a suitable exit or fleeing is impossible, then barricading yourself in a room may be your best option. Experts recommend locking the door and blocking the entrance with as much furniture as possible.

Also, turn off the lights and do not make any noise as these could attract the attacker. If you are trapped with others, be prepared to assign responsibilities:

Be prepared to storm your attacker if they breach your barricaded room. Studies show that playing dead or reasoning with a shooter are usually ineffective. Attacking a gunman from multiple angles is usually the best option.

If you are alone and have no escape route, then attacking the gunman head-on is usually your best bet because it is unexpected and can throw the perpetrator off balance.

If possible, you want to surprise them and attack them at close quarters. Aim for vulnerable spots such as the eyes, face, neck or crotch. Your goal should be to hurt them and gain control of their weapon. If you are at a distance, throwing any heavy object (staplers, paperweights, etc.) may help you injure or disorient them.

5. Run in the direction of law enforcement

If you see law enforcement, then you should proceed quickly in their direction. However, keep your hands above your head at all times as you approach them so that they know you are not a threat to them. Mass shootings are extremely chaotic and first responders will be jittery. Therefore, follow their instructions so that they can do their job.

Experts say Run, Hide and Fight is the order you should be thinking in terms of. If you find yourself in a mass shooting, don’t run to get personal possessions — like a cell phone. Instead, run to get out of the building (or situation) as fast as possible.

According to law enforcement officer John Bruner, “The first five seconds of an active shooter incident [are] paramount. Don’t freeze in disbelief. React immediately.” Mass shootings are still statistically rare, but preparing ahead for them could just be the difference between life and death.