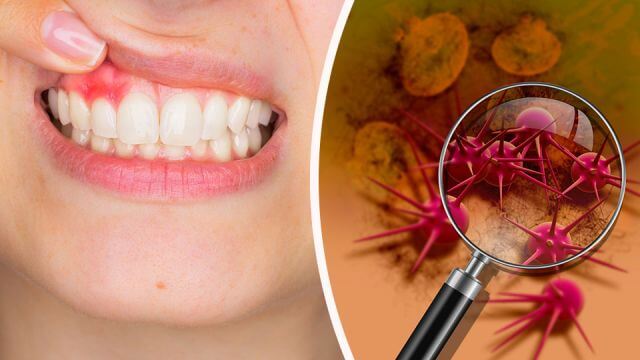 Most people are well aware of things that can raise a person’s risk of cancer. Stress, a poor diet, exposure to toxins and radiation, smoking, excessive alcohol consumption, that kind of thing. But new research now shows that there’s another, all too real risk hiding out in your mouth.

A study published this year in the Journal of Cancer Epidemiology found that women with periodontal disease are 14 percent more likely to develop cancer than those with a healthy set of teeth and gums. The study, which included a whopping 65,869 women aged between 54 and 86 years, found strong associations between periodontal disease and several types of cancer, including breast cancer, esophageal cancer, lung cancer, gallbladder cancer and skin cancer.

Six years earlier, a letter published in the Journal of Pharmacy and Bioallied Sciences explored the literature and found similarly strong linkages between oral health and cancer in many studies. According to the review, “periodontal disease is associated with an increased production of reactive oxygen species which, if not buffered sufficiently, cause damage to the host cells and tissues.” The oral inflammation that occurs as a result of periodontal disease then enter the bloodstream, greatly increasing the host’s risk of developing different forms of cancer.

In a nutshell: if your oral health is lacking, your risk of cancer goes up. So how can you tell if you’re at risk? What are the oral warning signs to look out for? Read on to find out more.

Got gum disease? Your risk of cancer just went up

Periodontal disease, more commonly known as gum disease, is thought to be caused by a buildup of plaque on the teeth and gums. Plaque, which is made up of bacterial colonies that latch onto the porous surface of the tooth, builds up over time and can eventually lead to inflammation.

As the inflammation spreads, gingivitis develops as the gums become swollen and more prone to bleeding. With time, gum recession and increasing tooth porousness allow more food and foreign matter to lodge in the oral cavities of the mouth, setting in motion a vicious cycle of infection and inflammation that soon begins to impact the body as a whole.

The concept that this process can increase the risk of cancer actually makes a lot of sense. Firstly, consider the fact that the human mouth is home to a diverse collection of microscopic organisms. Despite what dentists would have you believe, this oral microbiome is a good thing, provided it’s kept in a healthy state. The bacteria and fungi living there coexist in relative harmony, helping the initial breakdown of food in the mouth and acting as the first line of defense against internal infection.

Not only that, everything that takes place in the mouth is connected in some way to the rest of the body. So when something goes wrong in the mouth, and that very much includes inflammation and the development of periodontal disease, the rest of the body can suffer. With increasing inflammation, the healthy balance of good and bad bacteria is thrown off, favoring those microorganisms that flourish in an unhealthy environment. These organisms contribute to further inflammation, producing toxic byproducts that then circulate around the body and cause inflammation elsewhere.

And with systemic inflammation comes the risk of rapid cell mutation, and it’s only a short hop from here to development of cancer.

What are the signs of inflammation to look out for?

Luckily, it’s relatively easy to keep an eye out for telltale signs of oral precursors to cancer. As inflammation sets in, and especially with the onset of gingivitis, your gums will begin to get tender and sore, becoming redder and more prone to bleeding when you brush and floss.

With advanced oral inflammation and the beginning of periodontal (gum) disease, your teeth can start to decay and the next trip to the dentist may see a new round of fillings or perhaps even a pulled tooth. Thus with increasingly loose teeth and inflamed gums, your mouth is sending you a warning sign loud and clear: sort it out, or face an added risk of cancer.

How to avoid inflammation in the mouth

That all sounds very morbid, but actually it’s surprisingly easy to adopt healthy oral hygiene and discourage inflammation in the mouth.

Obviously, your first line of defense against oral inflammation is to brush and floss frequently. Brushing exposes the surface of your teeth to physical abrasion, which removes plaque buildup and discourages the overabundance of harmful pro-inflammatory bacteria. Flossing helps to remove food and other foreign debris from between the teeth, helping to further prevent the growth of harmful bacteria and lower risk of infection around teeth and gums.

But you knew that already, right? Brush at least twice a day, floss at night, maybe throw in some non-toxic mouthwash for good measure?

Beyond simple oral hygiene, however, is an even bigger factor governing the health of your teeth and gums: diet. Once again, you’ve probably heard your dentist harping on about this one as well, especially the need to avoid sugary foods.

They’re not wrong. Sugar is easily the biggest negative influence on your oral health, with higher sugar consumption directly linked to greater risk of cavities, significant increases in plaque and tartar, and an overabundance of pathogenic oral microorganisms like candida.

But this is where you need to put your thinking cap on. Sugar doesn’t just mean the regular table sugar you pour into your coffee each morning, or the stuff you add to your baked goods. This stuff is in everything: soft drinks, alcoholic beverages, bread, processed and pre-packaged goods, even fruit. In fact, some research indicates that fructose, the form of sugar found in fruit, can be even more damaging to your health than regular glucose. Ease off on the sugary foods, and your mouth will thank you.

Eat on a schedule

Interestingly, eating to a routine is also an important component of maintaining a healthy mouth. Studies show that regular eating patterns help to encourage ample production of saliva (which helps break down food and prevents oral decay) and signals to the good bacteria in your mouth that it’s time to amp up their digestive and immunoprotective powers. For this same reason, activities like jet lag that disrupt normal eating patterns can have a negative effect on your oral microbiome, setting you up for oral inflammation.

Get plenty of vitamins

Finally, be sure you’re getting plenty of essential nutrients in your diet. Vitamin C is known in the health community to encourage a healthy microbiome and reduce inflammation, along with the vitamins A, D and K2.