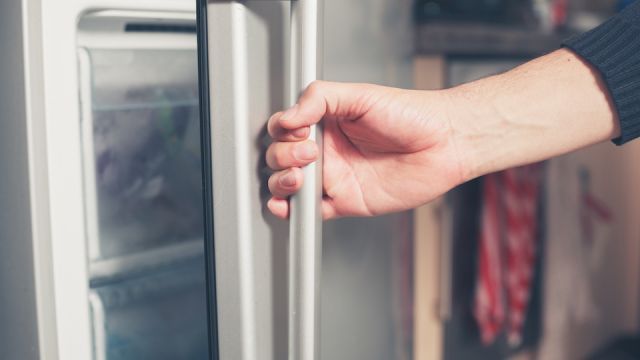 There are loads of so-called frozen food rules floating around out there. Sometimes it can be confusing to know which ones are facts and which ones are myths. Everyone seems to have their own set of rules, perhaps handed down by their parents or grandparents. One such “rule” that you may have heard is that ice cream has gone bad when you see crystals or that you should never thaw and refreeze meat. But sorting out which of these rules and others are real can make a difference in your household food safety.

Let’s uncover some of these now.

Which foods should never be frozen?

Indeed, you can safely freeze any food, some just don’t freeze as well as others. Take, for instance, salad greens and meat salads made with mayonnaise; they just don’t come out the same after they are frozen.  Whole eggs and egg yolks, along with custard pies, are also among the list of not recommended to freeze. You can freeze milk and cheese, but they may have a little different texture when you thaw them out.

How long can I keep food in a freezer?

Most foods can be kept indefinitely in a freezer and still be ok to eat. However, they may lose their taste, and their texture may be odd. Steak, whole chickens, and whole roasts can keep for up to a year, but once you cut the meat into pieces, the freezer life is reduced to six months. Other types of meat, such as sausages, are only good for two months. Download the FoodKeeper app on your phone. This handy tool will tell you how long certain foods will last in the refrigerator and the freezer.

What about those crystals on my ice cream?

You may see ice crystals form on food that has gotten warm and started to defrost and then frozen again. To keep your ice cream fresh, be sure to scoop it when it is cold and put it directly back into the freezer before it has a chance to thaw out. For frozen bagged food, make sure you squeeze the bag to see that it is fresh. Peas, beans, corn, and berries, along with small pieces of shrimp, and scallops should not feel like a solid block of food. This means that is has been defrosted and frozen again.

While freezing food slows down the growth of bacteria and pathogens, it will not kill them. If you freeze a food product that is about to expire, the expiration clock will start up again the minute you take it out of the freezer. Be sure that you put perishables, leftovers and prepared food in the fridge or freezer within two hours

If my power goes out, do I have to throw all the food in my freezer out?

Contrary to what you might have been told, a power outage does not necessarily mean that you will lose all of your food. There are some things that you should keep in mind, however, if you do lose power. The first thing is to keep your freezer shut – don’t open it if at all possible. Foods that are partially or fully thawed can be refrozen again safely as long as the temperature of the food has not risen above 40 degrees F. Throw out any food that has risen above the 40-degree mark for more than two hours.

Although you may think that frozen foods are less nutritious than fresh, they are not. Even in the frozen state, food maintains its nutritional profile. For instance, vegetables that harvested at an optimal time and immediately frozen will be just as healthy as fresh veggies. Since many fresh vegetables are transported a long-distance, they often lose some of their nutritional value by the time they get to your table.

Can I defrost food on my counter?

You should never thaw frozen food on your counter at room temperature. Food must be kept at a safe temperature when defrosting. Leaving raw poultry raw beef or any other food that won’t keep on your counter is asking for trouble. Use safe methods such as the refrigerator, cold water, or a microwave to defrost.