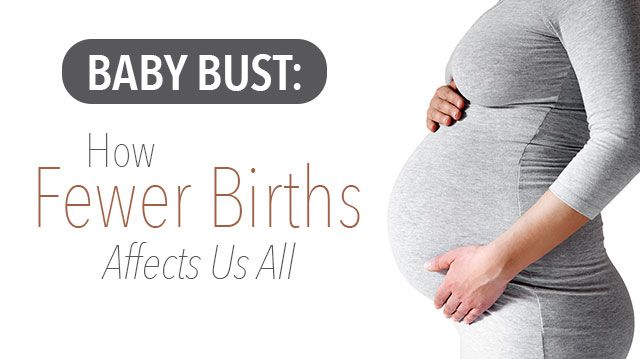 In many developed countries, the cycle of life is being disrupted. Children are growing up, becoming educated, job hunting, job swapping, working and playing. Then they are retiring. What they are not doing is having children.

Consider this: If a couple has a two children, the birth rate is flat, that is, not growing. Two people got together and replaced themselves with two more people. The net is zero population growth. If a couple had a third child, that would be an increase from zero.

Now look at the world. The European Union averages only 1.55 children for every woman of childbearing age. Singapore averages 1.2 births per woman, South Korea 1.1 and China 1.6. Though high birth rates in Africa keep worldwide growth rates slightly positive, in many countries populations are shrinking.

Since the recession, the US has been counted among those countries with a shrinking population. Though we have finally started to see a resurgence in childbirth — the birth rate was 1.8 in 2015. Commenters note that the average age of motherhood has shifted to women in their thirties and forties. Some scholars argue that more than lifestyle choices or economic hardship, the decision to postpone parenthood is fueling low birth rates worldwide. Time will tell whether our current baby bust is a recession-fueled anomaly or a more permanent shift in population growth. In the meantime, how will fewer babies impact America?

Many modern-day countries tax young people in order to pay for social security and medical expenses for older citizens. The United States is no exception. If the dangers of this setup weren’t clear before, they are becoming inescapably obvious now. An aging society means fewer young workers and less money for retirees. An uncomfortably high worker-to-retiree ratio coupled with longer life expectancy spells trouble for Social Security.

The Social Security administration projects the US worker-to-beneficiary ratio to drop to 2.1 by 2040 — meaning the number of people paying in will be very close to the number drawing benefits. In contrast, the ratio was 5.1 in 1960 and 3.3 as late as 2005. The government is weighing a variety of solutions, but there is no simple answer. Proposed solutions include raising the retirement age, providing fewer benefits to retirees, increasing taxes on future generations or some combination of all three.

Fewer workers will undoubtedly lead to a contracting economy as the number of goods and services that citizens demand shrinks with population size. In terms of the country’s economic prominence and prestige, a shrinking economy is undoubtedly a bad thing. In terms of the average living standards of its citizens, the projected outcome is mixed. A key question is whether innovation will lead to enough growth in productivity to keep GDP (gross domestic product) per capita stable.

Japan, for instance, is counting on a robot revolution to rescue the country from a dearth of able-bodied help. Nevertheless, a recent study from the East-West Center finds a lower birthrate may be economically beneficial to people who obviously bear the costs of raising children. According to this study, individual standards of living may increase even as the economy itself declines with a declining total population.

Low birth rates may wreak havoc on our economic system, there is at least one group of activists celebrating our shrinking population. Environmentalists have long argued that the footprint of humanity is both unsustainable and immoral.

Compared to the age of Earth, human beings haven’t been around all that long. In that time we’ve managed to cut down nearly half the trees, a phenomenon that has only accelerated since the Industrial Revolution. Marine diversity has been plummeting so rapidly that scientists predict a future without fish in our seas; that future could be as close as 50 years from now. Increased pollution, the rapid extraction of limited natural resources and climate change are growing concerns.

A smaller human population might help to slow our destruction of the planet. Given Americans’ share of resource consumption, our population contraction may be most important of all.

Not all of the likely impact of a declining birthrate is out of our control. Governments will undoubtedly initiate policies to combat any negative impacts, if not the trend itself. A number of governments are already doing so. Scandinavian states are famous for child-friendly policies such as subsidized child care and generous paid parental leave. One Italian mayor even started paying women for each child born. Though this is a particularly direct method of encouraging parenthood, many states — including in the United States — issue “refundable” tax credits on a per-child basis. That’s pretty much the same as cash. You either get a tax break or get paid the difference if you don’t owe tax.

A detailed 2008 New York Times article cautions America against Scandinavian practices. The article argues that America escaped the pre-recession fertility decline because of labor market flexibility. American women were able to work part-time, use flex hours and take time off of work without fear of giving up future employment. This flexibility, the article posits, would likely be lost with greater mandatory benefits. The argument is based on pre-recession America — an America with higher fertility rates.

If birth rates continue to rise, as they have since 2014, a change in social policy may not be implemented. If low fertility rates become a sustained trend, however, child-friendly policy changes are likely to follow. A number of employers are already enacting these changes in order to attract a high-quality workforce, many of whom demand progressive, family-friendly benefits.

America is a country of immigrants. We have long supplemented national birth rates with a healthy influx of foreign workers. Immigrants have also kept our birth rate high by producing more children than the average native-born American. The most common-sense, time-tested method of keeping the US population and birth rates high is to ease immigration policy and welcome foreigners.

Unfortunately, this may not be the magic bullet it has been in the past. Immigrants’ birth rates have fallen even more drastically than those of native-born Americans since the recession. Our foreign-born friends are still producing offspring at a higher rate, but the gap has closed significantly. At the same time, Mexico, India and other countries with traditionally high US-immigration rates are facing population declines of their own.