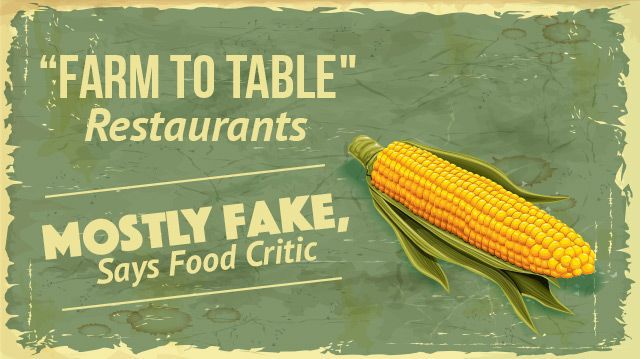 The allure of eating at a “farm-to-table” restaurant is compelling. When you enter one of these supposedly conscientious businesses, you assume that you are supporting local farms and eating fresh, non-GMO ingredients. You can dine without a guilty conscience, knowing that your meal is wholesome and environmentally conscious. You are reassured by knowing that your pork came from a free-range pig with a happy life before being made into a chop. You feel good that your produce wasn’t assaulted with pesticides prior to its consumption. Right?

Well, according to a Florida food critic Laura Reiley, that might not always be the case. Reiley, a food critic for The Tampa Bay Times, says that many of the “farm-to-table” restaurants at which she has dined actually serve a minimal amount of local foods. In fact, after months of thorough investigation, she found that many of these restaurants are selling blatant lies about how and where they get their ingredients.

Despite the fact that farm-to-table establishments boast the use of “local produce whenever possible,” the truth is that this ambiguous statement can be grossly misleading. In some cases, it’s a downright lie. “Check the small print,” says Reiley. For instance, she found canned goods being used in Tampa Bay’s Boca Kitchen Market, a self-proclaimed farm-to-table restaurant, as well as “blackberries from Mexico and blueberries from California.”

One of the primary restaurants to fall under Reiley’s scrutiny was St. Petersburg’s The Mill restaurant, which advertises all of their ingredients coming from within a 200-mile radius. With earthy barnhouse decor, lights made of tractor wheels and bathroom sinks made from tractor tires, everything about The Mill leads its diners to believe that they are getting an authentic farmhouse meal.

However, upon closer inspection, Reiley found that many of The Mill’s alleged local purveyors have never actually sold their dairy, meat, fish or produce to the farm-to-table eatery. Instead, Reiley discovered that the Floridian restaurant got its trout from a fish farm in Idaho, its yellowfin Tuna from the northern East coast and its beef from Colorado. All perfectly edible food, just not remotely local to Tampa.

The Mill’s customers were getting fed a bunch of unsustainably raised, nonlocal foods. And a healthy serving of lies.

Perhaps even more alarming was that the more self-proclaimed local-farm purveying restaurants Reiley investigated, the more she was led to believe that most farm-to-table restaurants are a complete farce.

“My conclusion?” writes Reiley. “Just about everyone tells tales. Sometimes they are whoppers, sometimes they are fibs borne of negligence or ignorance, and sometimes they are nearly harmless omissions or ‘greenwashing.’” Either way, she concluded that we are probably not consuming the conscientious foods we think we are when eating at farm-to-table restaurants.

What she found instead is that many business owners capitalize on society’s growing infatuation with sustainability, buying local and eating non-GMO foods. Of course, this trend is not limited to restaurants. Simply peruse the aisles of a grocery store and you will be accosted with food labels claiming to be non-GMO, sustainably raised, natural or responsibly grown. The problem is that these food claims are difficult to verify and the restaurant business is no exception.

As with many fads, what started as a well-meaning movement to support local farms and serve customer the healthiest, freshest ingredients has now become a marketing scheme. Some are even calling it “farm-to-fable,” alluding to the movement’s misleading extremes.

Barry Glassner, author of The Gospel of Food: Everything You Think You Know About Food Is Wrong, says that “What’s come about now is that farm-to-table is so widespread and so established, and so many restaurants are doing it, that it’s become a new kind of branding.”

The farce has grown so extensive that certain chefs have gone from subtly misleading their customers about the origins of their ingredients to knowingly selling flat-out lies. Tom Chino of Chino Farm is renowned for exposing dishonest restaurants. “Chefs will come, write down notes, leave without buying anything, then say they’re serving our food at their restaurants,” he says.

So what are we to do amidst the dishonest scramble to entice well-meaning customers who yearn for wholesome, locally-sourced meals? After all, when we go to farm-to-table restaurants, we are willing to pay extra in order to be fed sustainable, organic ingredients. Shouldn’t we at least be able to know what our money is being spent on?

Reiley suggests that consumers get informed and inquisitive about the food they eat. Do some research before dropping big bucks on an allegedly local meal. Inquire into companies professing to sell “natural” foods in grocery stores. It is sad that businesses are taking advantage of good intentions, but at least it will motivate some to be proactive about the quality and source of the foods they eat.

Would you pay extra to eat at locally-sourced restaurants? Would you be upset to discover that many of these ingredients are actually come from distant commercial farms?