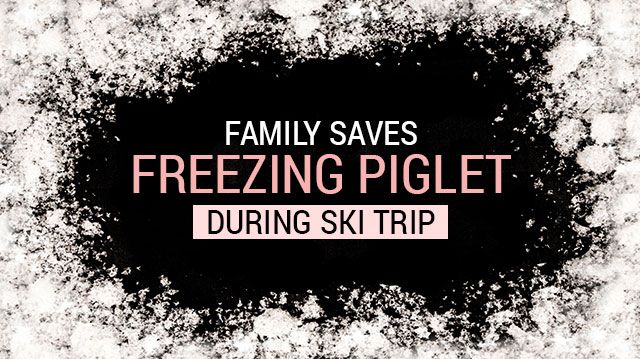 For a piglet named Wee Wee, the Smith family are true heroes. Where others might have turned away, this family saved the life of a nearly-frozen piglet, and found him a safe new home.

Perry and Elisabeth Smith were coming home from a day of skiing in Hagerstown, Maryland with their two children, Perry Jr. and Catherine, when they spotted a piglet freezing on the side of the highway. According to Perry Jr.:

The family later told news sources that a large snow plow was coming towards the lump, and the piglet would have been buried, and no doubt would not have survived, had they not taken action.

Coming to the piglet’s aid, the family dug the little pink lump out of the snow and ice, wrapped him in a sweatshirt, and snuck him into their room at a ski lodge.

The family spent the night warming the piglet and nursing him back to health. They wrapped him in towels, and took turns cuddling him in their hotel room bathroom to keep him warm. They treated his cuts and scrapes with ointment, fed him mashed bananas, and gave him water by hand.

The piglet, who they named Wee Wee, soon began to recover, and run around the hotel room. According to a Facebook post by Elisabeth Smith:

“Wee Wee is thriving, he’s having a dinner of bananas. We are introducing apples, corn and green beans with no success.”

The family found that Wee Wee had a number on his ear, indicating that he had likely escaped from a factory farm transport truck. The brave piglet had probably jumped from the truck, sensing the grim future before him if he did not escape. As many of us know, factory farms employ some horrific practices, and even those of us who eat meat should think very carefully about ever supporting these establishments.

Although the Smith children had grown attached to Wee Wee, the family could not keep him. However, they did find him a new home at the Poplar Spring Animal Sanctuary in Maryland. This sanctuary gives a safe home to rescued farm animals of all kinds, and many rescued pigs like Wee Wee live there.

A post by Poplar Spring Animal Sanctuary on their new arrival reads:

“[Wee Wee] loves his new dog bed and teddy bear too! He is such a sweet little pig, and already loves belly rubs and is climbing in our laps to get petted. He runs around and plays like a little puppy! He will have a wonderful life here, and when he is a little bigger he will be able to live in the barn with lots of rescued pig friends.”

Hooray for Wee Wee! Instead of being subject to the horrors of a factory farm, he is enjoying a new life thanks to the Smiths.

Wee Wee’s close call in the snow and ice also serves as a reminder to us humans of the importance of staying safe in the winter. Freezing weather affects humans as much as piglets, and accidents happen. Especially during this season, those who live in Northern climates need to be equipped to survive the icy temperatures.

Check out our safety tips for walking in the wintertime, which can be quite enjoyable if you bundle up and stay hydrated. We also have some pointers on how to prepare yourself and your family for winter emergencies, such as a power outage.

As far as any pets you may have, it’s imperative to keep them safe too if they go outdoors.

Tanya is a writer at The Alternative Daily with a passion for meditation, music, poetry, martial arts, and overall creative and active living. She has a special interest in exploring traditional Eastern remedies and superfoods from around the globe. Currently, she and her son live in Wisconsin, where they enjoy spending time immersed in nature.