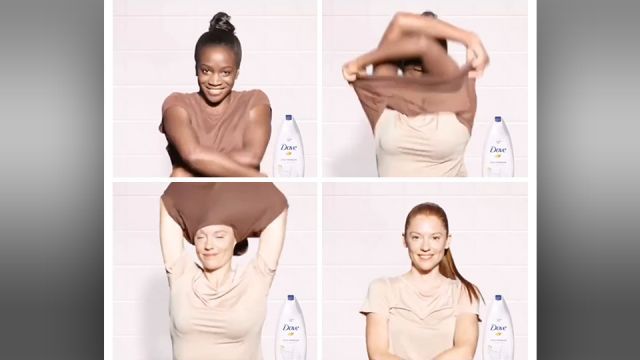 Dove has claimed it “missed the mark” after it was accused of racism for its latest ad for body lotion.

The ad featured an African American woman taking her brown shirt off and turning into a white woman in an almost-white t-shirt. The third person the woman changes into is a woman of Middle-Eastern appearance.

Dove posted the three-second video ad on its Facebook page on Friday, and it has since been removed — but not before people took it up on social media.

American make-up artist Naomi Blake, who goes by the name Naythemua, was one of the first people to share the ad and criticize it. “What does America tell black people? That we are judged by the color of our skin and that includes what is considered beautiful in this country,” she said.

One woman, who identified as black, commented on Naythemua’s post, arguing “This commercial went from black to white to middle eastern (sic). Honestly. Give it a rest. It’s a body wash commercial.” Naythemua pointed out that the poster didn’t appear to look black, and that Dove “…didn’t have no black person at the company to say no.”

A Business Insider analyst noted that the ad, “which is being slammed for what many perceive as carrying an overtly racist message — flies in the face of everything Dove has been trying to say about women over the past decade with its ‘Real Beauty’ campaign.”

Dove has tried to distinguish itself by promoting acceptance of women’s bodies of all shapes and sizes, with messaging like “You’re more beautiful than you think.”

“For a company that has professed to embrace ‘real beauty’ by showcasing everyday women, this misstep is unconscionable,” said marketer Chris Allieri.

Dove issued an apology over Twitter on the weekend.

An image we recently posted on Facebook missed the mark in representing women of color thoughtfully. We deeply regret the offense it caused.

The company also told Reuters it was “re-evaluating our internal processes for creating and approving content.”

However, some people felt the apology didn’t go far enough, and the hastag #BoycottDove trended over the weekend.

@Dove that apology is weak. People always want to apologize after doing dumb things before they THINK. No more Dove products for me.

Sorry can’t stop there. As a marketing “executive” I’d love to have a deeper conversation about how your internal approval process works.

“When your ad is being called ‘racist’ by people across social media, you’ve done a lot more than ‘miss the mark,'” said Allieri. “It just goes to show that in reality there is a long way from Cannes to Main Street. Maybe they should have ‘real people’ create the ads rather than just starring in them.”