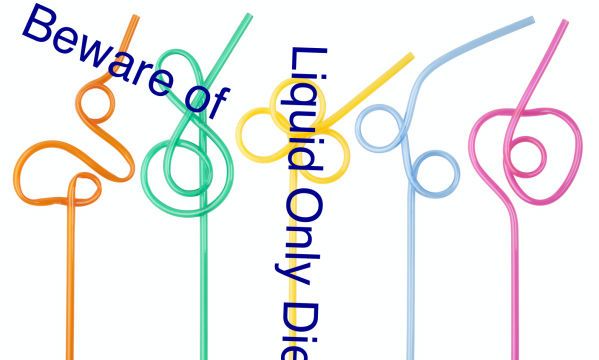 Liquid diets have been around for decades in the Western world, promoted as an ideal way to drop weight quickly as far back as the 1950s. Long before that, poet Lord Byron was said to have consumed vinegar-water in order to obtain a slimmer waistline.

As the name suggests, a liquid diet means that you’re getting all or most of your calories from beverages – some limit the dieter to fruit or vegetable juices, and others to shakes. Some liquid diets call for just one or two meals to be replaced with drinks, while one meal consists of healthy foods.

A few of the most common liquid diets you’ve probably at least heard of include the Master Cleanse, also known as the Lemonade Diet, Slim Fast, and the Cabbage Soup Diet.

No matter which type of liquid diet, experts are pretty much in agreement that there is nothing good about them – not only are they very unlikely to lead to long term weight loss, they often lead to unpleasant, unhealthy side effects – and in rare cases, death.

A study conducted by the Food and Drug Administration back in the 1970s, following the release of a popular book entitled The Last Chance Diet, which advocated a “miraculous” liquid protein diet consisting of just 300 to 400 calories per day on average, discovered nearly 60 deaths among liquid dieters.

While some occurred in those who had underlying conditions, many otherwise healthy dieters had died of ventricular arrhythmias. Researchers found that the pattern of deaths suggested “the effects of protein-calorie malnutrition on the heart,” including atrophy of the heart muscle.

If you’re tempted to take the risk, consider that UCLA researchers found that while liquid dieters can lose five to ten percent of their weight in the first few months of the diet, nearly two-thirds regain even more weight than they lost within the next four to five years.

In addition to the potential of dying, just a few of the other side effects of a prolonged liquid diet include headache, irritability, aches and pains, fatigue and exhaustion. There is little chance that you’ll have the energy to perform even many basic daily tasks, let alone a workout, which means you’ll start to lose muscle, which slows the metabolism further – and causes an unattractive flabby appearance.

So, what should you do to obtain the slim look you’re aiming for? If you hope to achieve this goal, and maintain it for life, you’re going to have to get back to the basics. Drink lots of water throughout the day, consume plenty of fresh, organic fruits and vegetables, lean meats like organic, free-range poultry and/or wild caught fish like salmon, eggs from free-range chickens – and don’t shy away from foods that contain healthy fats like coconut oil, nuts and seeds. Indulge in an occasional piece of dark chocolate, too.

Avoid soda, both diet and regular, like the plague. If you get tired of drinking plain water, add a squeeze of lemon, or drink more herbal tea. A cup or two of green tea in the afternoon is a great way to help keep the fires of your metabolism burning at their max.

Cutting out processed food and fast food is also important – even so-called diet foods are often highly processed and contain harmful ingredients that can trick your body into holding onto fat. You may also want to consider eliminating grains from your diet, as consuming them is known to contribute to what’s known as “wheat belly,” and weight gain. 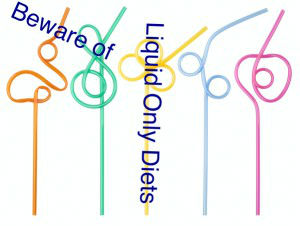 Instead of focusing on what you can’t eat, focus on what you can eat. Have fun with it and come up with new recipes based on all of those healthy ingredients. Not only is it a whole lot easier than starving yourself on a liquid diet, you’ll probably feel better than you ever have before!