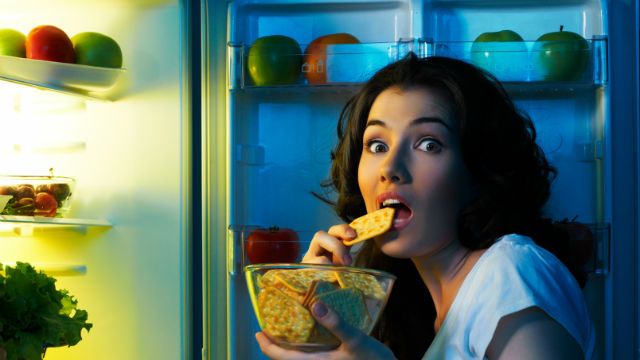 Researchers have found more evidence that midnight snacking is contributing to weight gain. A new study conducted at the Salk Institute found that it’s not just a high-fat, high-calorie diet that contributes to body weight, but an extended eating time.

The scientists say that confining caloric consumption to an 8- to 12-hour period, like people did just a century ago, could help fight high cholesterol, diabetes and obesity.

The study authors demonstrated that predictable times of eating better synchronize the function of hundreds of genes in the body. Their results were published on December 2, 2014 in the journal Cell Metabolism.

Corresponding author Satchidananda Panda, associate professor at the Salk Institute for Biological Studies, stated, “these days, most of the advice is, ‘you have to change nutrition, you have to eat a healthy diet.’ But many people do not have access to healthy diets. So the question is, without access to a healthy diet, can they still practice time-restricted feeding and reap some benefit?”

In the new study, researchers subjected almost 400 mice, ranging from normal to obese, to a variety of different diets and lengths of time restrictions.

Regardless of whether their diets were high in fat, fat and sucrose or just fructose, mice that were given time restrictions of 9 to 12 hours, consuming the same amount of daily calories as their unrestricted counterparts, gained less weight than the controls.

The researchers also gave some of the time-restricted mice a respite on weekends, allowing them free access to high-fat meals during those two days. The mice had less fat mass and gained less weight than the mice given a freely available, high-fat diet the entire time. The mice that were freely fed just on weekends looked much the same as mice given access to food 9 or 12 hours a day for seven days a week, suggesting tha diet can withstand some temporary interruptions.

Even more important, the researchers say, are the results of an experiment in which the mice that had already become obese by eating a freely available high-fat diet had their access to food restricted to a nine-hour window. Although they continued to eat the same number of calories, they dropped body weight by five percent within just a few days. Eating this way also prevented the mice from further weight gain (roughly 25 percent by the end of the 38-week study) compared to the group kept on the freely available high-fat diet.

The team also compared the mice with mice given a more balanced diet, showing that the time-restricted mice had more lean muscle mass than their unfettered littermates.

Panda said that it was an “interesting observation that although the mice on a normal diet did not lose weight, they changed their body composition. That brings up the question — what happens? Are these mice maintaining their muscle mass which might have been lost with free feeding, or are they gaining muscle mass?”