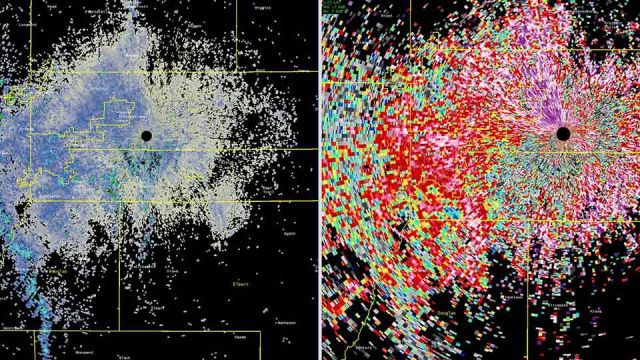 A puzzling swarm of red dots was seen on radar screens this past week, covering over 100 miles across the Denver region. At first, the weather service was confused and thought the images they were seeing might have been birds.

Look at what’s flying into Denver! Radar from last hour showing what we believe to be birds. Any bird experts know what kind? #ornithology pic.twitter.com/EAqzdMwpFU

After reaching out to bird experts, meteorologists were shocked to find out that the images causing them confusion were Painted Lady butterflies migrating south.

This tweet shows The National Weather Service of Boulder reaching out:

The following day, they confirmed that the images were migrating butterflies:

1/4: We believe migrating butterflies are the cause of yesterdays radar signature. Thanks for all the reports and sightings! #cowx

According to reports, Meteorologist Paul Schlatter claimed, “The radar started to light up right after sunrise and that whole mass just started to move over Denver, all flying in the same direction, kind of floating with the light winds that day.”

Also, multiple meteorologists covering the situation said that it is extremely rare for such a large amount of insects to be traveling in that fashion, let alone to be detected via radar. Butterfly researchers claim this is one of the largest migrations in recorded history across the state of Colorado. “We hadn’t seen a signature like that in a while,” said Schlatter.

The NWS of Boulder later followed up with a series of tweets, confirming that the migrating butterflies were flying very close to the ground.

4/4: Migrating butterflies in high quantities explains it. Today, the butterflies are staying close to the ground. #cowx #Science pic.twitter.com/rkpwmPRnsi

Usually around this time of year, Painted Lady butterflies migrate to warmer climates in hopes of finding their food source for the winter months. “You will see more or less butterflies migrating each year depending on the prior weather conditions like rain, more plants, caterpillars, or even more adult butterflies,” said Sarah Garret, a Curatorial Lepidopterist at the Butterfly Pavilion in Colorado.

The rare and majestic event was highly talked about on social media, especially since many people in the Denver saw the low-flying insects first hand.

Not quite unicorns and rainbows…. but sunshine and butterflies make it a Happy Friday! #Denver pic.twitter.com/D71C0nOMII

Right now, the butterflies are reaching their peak in the Denver area, because colder weather will force the butterflies farther south. Eventually, most of them will be able find their food source in warmer climates, like Mexico.

On Monday, the forecast is calling for snow in the Denver area, so people like meteorologist Cory Reppenhagen believe the butterflies will be impacted. “The butterflies that are around; a lot of them might actually not make through that because freezing temperatures and insects typically don’t go well together,” said Reppenhagen. “I wouldn’t be surprised if it warms up after that and we still have a few hanging out. But, you know, that’s why they migrate, to escape cold temperatures.”

Have you ever seen animals migrating en masse like this before? Why do you think they migrated in such a huge swarm this time? Let us know in the comments!