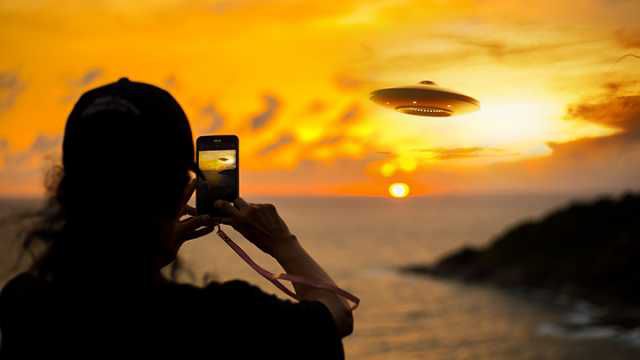 For some strange reason, UFO sightings appear to be reaching new heights. In Connecticut, reports of unidentified flying objects are up 50 percent in 2017. In addition, the Chilean government recently released an astonishing video (as part of an official report) of an incident in which two Navy helicopters pilots witnessed a mysterious object hovering in the sky. Further, weather experts have been baffled by the appearance of black “alien rings,” which have been observed all across the globe (including Disney World, Russia and the United Kingdom).

What is behind the rash of unexplained flying objects? Are we close to discovering the truth about the existence of alien lifeforms? And just how credible are these latest sightings and reports? For now, you’ll just have to decide for yourself. But here are five of the most tantalizing examples of photographic evidence that UFOs exist, which no one can explain.

For years, Chilean authorities have been trying to make sense of an incident that took place on November 11, 2014. On that day, two experienced Navy pilots on routine patrol near the coast of Santiago, spotted a mysterious object from their Airbus Cougar AS-532 helicopter. They used a forward looking infrared camera to record video of it, which you can see for yourself here:

The nearly ten-minute black and white video switches from infrared to HD as it tracks the unexplained phenomenon. At one point, the object appears to emit a plume or cloud of some sort.

Naturally, the pilots immediately alerted ground control, which tried to locate the object on radar, but to no avail. They also tried to contact it, using existing international protocols. After an extensive investigation officials have ruled out aircraft, drones, balloons, space junk and virtually every other reasonable explanation, making this one of the most credible cases of a UFO caught on camera.

In the 2016 film, “Arrival,” aliens used smoke circles to communicate. Is that what is going on here with the inexplicable “smoke vortexes,” which have been spotted all over the world?

Some UFO experts have put forward the theory that the rings are evidence of flying saucers popping in and out of portals from other dimensions. Witnesses are describing this phenomenon as “the weirdest thing they’ve ever seen.” So far, no one seems to offer a plausible explanation.

On July 22, a documentary crew that studies atmospheric anomalies managed to capture video of a glowing orb that streaked gently across the sky in an area of British Columbia called the “Stawamus Chief.”

The object, which was filmed using thermal imaging, apparently made no sound as it descended beneath the tree line. According to the reports, the “People at the Chief have actually seen lighted orbs or spheres” pretty regularly.  As Rob Freeman, one of the documentary filmmakers noted, “The Chief is a sacred mountain.” He then added, “Lights are found in ancient spots like Peru or Norway. Whatever it is, in every single country.”

Did a pair of UFOs take part in a Skyfest aerial show that took place recently in Spokane, Washington? Air enthusiast John Whichelow thinks so. He took some impressive video of Thunderbirds streaking across the sky at the Fairchild Air Force Base.

Only later, however, did he realize that his camera may have caught something more — two unidentified objects (one white and one black) zooming so fast it made the air force jets seem like ancient relics by comparison. So far, there’s no official word or explanation to account for phenomena caught on camera.

5. UFO spotted off the coast from the beach in Sydney, Australia?

Multiple witnesses and experts at Australia’s Civil Aviation Safety Authority are at a loss to explain a mysterious flying object that was spotted on the morning of July 5 shooting upwards to the sky.

Whatever it was, it appeared to be traveling way too fast to be a drone or a plane. In addition, there are no rocket launching sites anywhere in the vicinity. Separate photos of the incident, which are sparking interest across the Internet, were taken by Gus Medero and Blake Hirst.  According to Mr. Hirst, “I’m not one to believe in UFOs or ghosts or anything like that but it makes you wonder.”

Keep your eyes peeled for UFOs

The data proves it, UFO sightings appear to be at or near an all-time high. Space experts speculate that scientific chatter about discovering exoplanets and new initiatives aimed at finding signs of extraterrestrial life are fueling people’s imaginations. Of course, there’s another explanation too — maybe a lot of these alien encounters are for real.