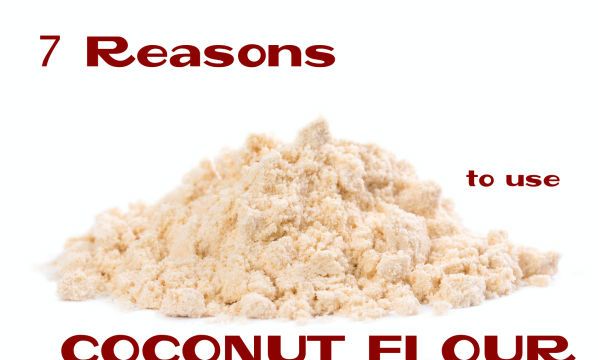 Today in the Western world, white flour is the base of nearly every baked good you will come across. While those cookies and fresh breads may be delicious, many health experts agree that wheat, and the refined, bleached flour that is derived from it, is a major player in the obesity epidemic, as well as a range of chronic illnesses.

Fortunately, there is a remarkably healthy, delicious alternative: organic coconut flour. This flour is made from the meat of organic coconuts, which is dried, separated from much of its fat content, and ground.

The following are seven reasons to strongly consider making the switch from the white, all-purpose stuff to organic coconut flour.

Individuals with celiac disease know all-too-well the damage that gluten, a protein found wheat, barley and rye, can cause. Those suffering from celiac disease (about one percent of the population) experience severe inflammation, damage to the small intestine and malabsorption of nutrients when they consume gluten. However, what about everyone else?

It is estimated that up to 30 percent of the world has some degree of gluten sensitivity, and many do not know it. Gluten sensitivity can cause a wide range of symptoms, including digestive distress and chronic fatigue, which may be difficult to trace back to gluten. Other individuals may experience allergic reactions to wheat.

Coconut flour, however, is gluten free, and considered highly hypoallergenic. So, unless you’re allergic to coconut, this is a very mild, non-inflammatory flour to use.

Gliadin, one protein component in wheat, has been found to be highly addictive. It stimulates the appetite, and leads to cravings for more and more wheat. This is one reason why it is so easy to over-snack on baked goods. Needless to say, this is particularly bad for your waistline.

Additionally, wheat contains a carbohydrate known as Amylopectin A, which is linked to rapid spikes in blood sugar, much like those which occur when we eat sugar. For this reason, eating wheat may raise your risk of insulin resistance and belly fat, as well as result in digestive discomfort.

White flour is bleached and treated with various chemicals

Leading health expert Dr. Joseph Mercola explains that today’s wheat is doused in chemical pesticides during all stages of its growth, starting with the seed. It is also sometimes sprayed with “plant growth regulators,” which may mimic hormonal activity.

To make refined, all-purpose flour, wheat is bleached, and as a result of this, the nutrients that were contained in the original wheat are largely processed out.

Modern wheat itself is often cross-bred with potential toxins

When wheat is grown nowadays, it is often cross-bred with various substances. One example is Clearfield Wheat, which is crossbred with sodium azide, a toxic chemical used in industrial applications. Other wheat strains are radiated in order to trigger mutations to achieve higher yields.

Coconut flour is rich in nutrients

While white flour barely has any nutrients to speak of, coconut flour is rich in protein, and contains coconut oil, which is one of the healthiest fat sources on Earth.

This flour is also rich in dietary fiber, much of which is insoluble fiber. Insoluble fiber is crucial to healthy digestion, as it adds bulk to stool, helps alleviate constipation and protects the colon from damage. It also creates a satiating effect, making you feel full longer after you eat it.

Coconut flour is great for achieving and maintaining an ideal weight

Due to its high fiber content, healthy baked goods made with coconut flour can be great for a weight loss plan. Instead of eating the whole box of cookies – which one might with cookies made with white flour – you will likely feel full with much less.

Also, as coconut flour does not contain inflammatory gluten, it will not trigger weight gain and does not spike blood sugar. 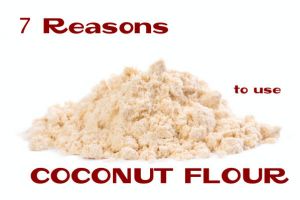 Any bread or baked dessert can be enhanced by the light consistency and mild tropical flavor of coconut flour. Not only is coconut flour healthy, it also tastes wonderful.

Keep in mind that when you switch to coconut flour, you will have to modify your recipes accordingly – you cannot simply switch the exact amount of white flour that a recipe calls for with coconut flour, the ratios will be different.

However, the Internet gives us access to a wealth of great recipes, and with a little practice, baking with this delicious flour will soon become second nature.