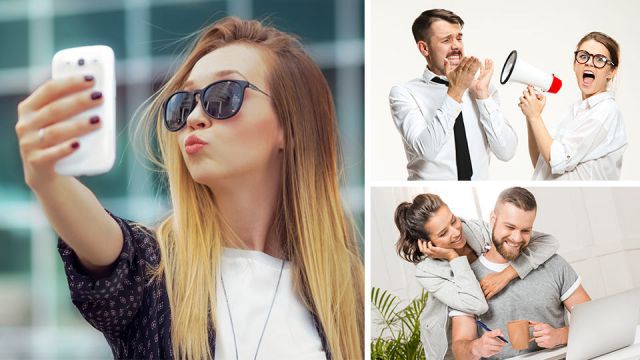 He’s attractive, confident, charismatic — what a catch! But wait, he also lacks empathy, is condescending and has manipulation down to a fine art. Sadly, you didn’t see the signs soon enough. Now you’re in love with a narcissist. But how do you know for sure?

Running his fingers through his hair while staring longingly into the mirror doesn’t necessarily make him a full-blown narcissist. Loving a narcissist is much more complicated than that, and can leave you feeling confused, insecure, betrayed and like you’ve been hit by a Mack Truck. Here’s what a true narcissist’s behavior looks like.

When a narcissist finds you, they waste little time trying to win you over. “Love bombing,” is a term first used in the 1970s by members of the Unification Church of the United States (also known as “Moonies”). Notorious cult leaders like the infamous Charles Manson and David Koresh used love bombing to con followers. Even pimps and gang leaders use it to encourage loyalty and obedience. Love bombing is a manipulative tactic used by someone who attempts to influence another person with over-the-top gestures of attention and affection, suggests Dr. Dale Archer for Psychology Today. And it happens at a fast and furious pace that often leaves a person reeling.

Love bombing includes romantic conversation and talks about “our future.” A love bomber may say things like, “You’re the most beautiful person I’ve ever met,” and “I’ve never met anyone like you before, someone I want to marry.” This may seem romantic at first. But, the problem is, love bombers are master manipulators who look for targets — often playing on insecurity. They’re emotional vampires, says Dr. Archer, because they use attention and affection to build trust.

And once you’re hooked, his or her love and admiration quickly turns to devaluation. Suddenly your loving and affectionate man or woman has turned controlling and angry in a way that will leave your head spinning.

It’s easy to understand why you fell for your charming narcissist. Narcissists are often charismatic and very persuasive when they’re interested in someone. They’ll make you feel like a million bucks and literally charm the pants off you. If you give them your full attention — and fulfill their desires — they can be very engaging. But once they become bored or have gotten what they want, they’ll drop you like a hot potato.

Does your significant other expect preferential treatment from others? Do they expect others to cater to their needs, without being considerate in return? To a narcissist, the world is their oyster and revolves only for them.

If the man or woman you love has an exaggerated sense of self-importance, suggests Preston Ni for Psychology Today, then they may be a narcissist. It’s okay to brag on occasion, but narcissists often believe they are more special than the average person, and that others could not survive without their contributions. Narcissists see themselves as a hero or heroine, a prince or princess, and are just plain better than everyone else.

Does the man or woman in your life make you feel minimized? Are you constantly second-guessing yourself — your feelings, perceptions and even your memories? If you sometimes wonder if you’re actually going crazy, then you’re likely experiencing a manipulation technique from your narcissist known as “gaslighting.”

The term “gaslighting” is inspired by the 1944 film “Gaslight,” where a husband systematically manipulates his wife to make her feel crazy. This form of psychological abuse is often used by narcissists — on purpose or unwittingly — to impart a sense of anxiety and confusion. That’s because someone who’s narcissistic wants to erode your self-confidence and self-esteem, so that you’re no longer able to function in an independent way. They need to feel like they are smarter than you.

Soon you’ll no longer trust your own memory, perception or judgment, suggests Christine Louis de Canonville for Narcissist Behavior. The emotional damage caused by gaslighting causes is huge. If you are exposed to it for long enough, you’ll lose your sense of self, says Canonville. And when that happens, you stop trusting your own judgments, and even the tiniest of decisions will make you insecure. If you express your opinion, and he or she does everything to change your mind, then you could be a victim gaslighting.

Takes over or interrupts conversations

Narcissists love to talk — usually about themselves — and won’t give you a chance to take part in a two-way conversation. If you find yourself struggling to have your views and feelings heard, or even get a word in edgewise, then you’re likely in love with a narcissist. Not everyone has great communication skills, but a narcissist often interrupts and takes over conversations, focusing back attention on themselves. When you finally get your point in, he or she will show little interest in you, and you’ll likely be corrected, dismissed or ignored.

More men than women are narcissists

Although both sexes can be diagnosed with narcissistic personality disorder, usually 50 to 75 percent of the people diagnosed are male, suggests Psychology Today. While most experts agree that the cause of this disorder is not yet well-understood, genetic and biological factors, as well as environment and early life experiences, could play a role. And if you’re hoping to get help for your narcissistic lover, that may not be so easy.

Treatment for narcissistic personality disorder can be challenging to say the least, since people with this condition exhibit a great deal of grandiosity and defensiveness, says Psychology Today, which makes it difficult for him or her to even acknowledge they have problems. If you’re in a relationship and can relate to many of the signs above, then you may be involved with a narcissist. So, take a long look at your man or woman and decide: is this really what you want from love?