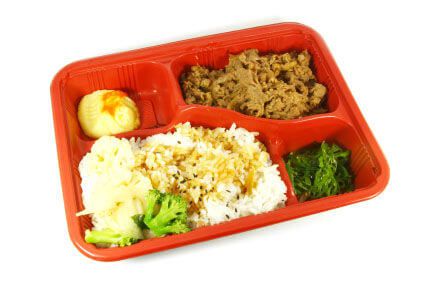 Frozen dinners were first marketed in 1949 by Albert and Meyer Bernstein under the brand Frozen Dinners, Inc. They sold under the name “One-Eyed Eskimo” that same year.

Jack Fisher also made frozen dinners available at bars and taverns, during this same period, under the name “FridgiDinner.” However, neither company was nearly as successful as Swanson’s, who truly “perfected” the frozen meal in the early 1950’s when they capitalized on America’s new found love, television.

Swanson made TV-themed frozen dinners called “TV Brand Frozen Dinner,” and moms all over the country suddenly had a night or two free from their hot kitchen. The first TV dinner was sold in 1954 and cost just under a dollar. It contained cornbread, stuffing, peas, sweet potatoes and turkey.

Desserts did not appear until about 1960, so moms were still responsible for the sweet treats. Initially 5,000 dinners were assembled by 24 women, but by the end of the first year of manufacturing, over ten million TV dinners were sold, mostly to middle and upper class people who could afford television at the time.

Women, who had been the main cooks in the family up until the time of the frozen dinner, suddenly had free time to pursue a job or other activities without feeling guilty about providing a hot meal for their family. However, it was at this point in history that we started seriously compromising the nutritional quality of our food – in short, we sold out to convenience.

The frozen meal has continued to evolve over the last 40 years and is now driven by flashy marketing, seductive illustrations and billion dollar advertising campaigns. Although Swanson’s no longer carries the iconic name, the frozen meal lives on and will continue to live on as long as we allow our time-challenged lives to drive our food choices. The fact that over 90% of what Americans spend on food is spent on processed items paints a very grim picture indeed.

So What is Wrong with a Frozen Dinner?
Obviously, a frozen meal is processed. Frozen and fast food may sustain your life, but they are void of the real nutrition that the body needs to be strong and vital. From coughs and colds to degenerative disease, without proper nutrition the body will not have the energy it needs to stay well.

If 90% of our diet is processed, that means that we are getting very little, if any, raw, uncooked foods. In reality, the best health possible is achieved when we are consuming 90% raw food.

Many frozen meals contain high amounts of sodium, trans fats and sugar. People who consume frozen meals may find themselves hungry a short time after eating because of the improper balance of proteins, carbohydrates and fats and a high amount of sugar.

However, there are a few frozen meal options that are better than others. According to the Good Guide, the healthiest frozen meal awards go to Veggie Patch with its frozen vegetable patty, Stouffer’s Easy Express Skillet Chicken Alfredo and Presidents Choice Yorkshire pudding.

Kicked to the curb were Hungry Man’s grilled bourbon steak strips and Swanson’s Hungry Man, noodles, gravy and beef and Barney’s potato puffs hors d’oeuvres. Naturally, we are not recommending any of these products.

Rather than spend time trying to read labels and figure out what is healthy and what is not, why not make your own frozen meals? Taking a couple of hours each week to prepare “real” food dinners for your family honors your busy schedule and truly makes you feel good about providing nutritionally sound meals. Here are a few options to consider.