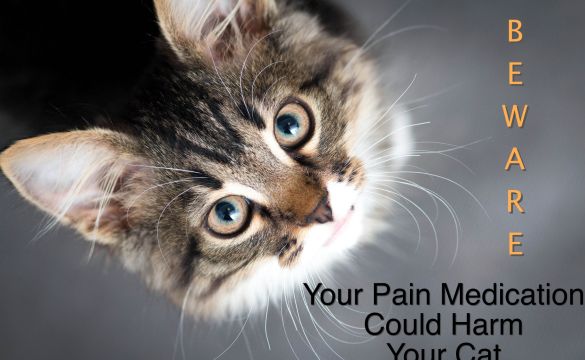 Veterinarians have said for years that pain medications could be poisonous to pets, but until now little attention has been given to pain relief creams.

NSAIDs can kill cats
Nonsteroidal anti-inflammatory drugs (NSAIDs) are often prescribed for the treatment of inflammation and pain. Oral versions of this type of medication include forms of ibuprofen, i.e., brand names such as Advil, Motrin, and Aleve. For muscle and joint pain, a topical form of NSAID, such as flurbiprofen, is often prescribed. This topical form has already been linked with cat illness and death.

According to a report by the U.S. Food and Drug Administration (FDA) that was released on April 17, 2015, “FDA is alerting pet owners, veterinarians, health care providers and pharmacists that pets are at risk of illness and death when exposed to topical pain medications containing the nonsteroidal anti-inflammatory drug (NSAID) flurbiprofen. People using these medications should use care when applying them in a household with pets, as even very small amounts could be dangerous to these animals.”

These two cats died despite veterinary care. A third cat in the second household also died after the owner had stopped using the medication. Veterinarians performed necropsies on the three cats that died and found evidence in the kidneys and intestines that were consistent with NSAID toxicity.

The American Veterinary Medical Association says that ibuprofen is the most commonly ingested drug in pets. It can cause them to suffer intestinal or stomach ulcers, as well as kidney failure. In the recently reported cases of cat problems due to NSAID ingestion, the cause was flurbiprofen. In the past, flurbiprofen was usually seen as a problem for dogs rather than cats.

“I can’t even remember the last cat I’ve seen that got into ibuprofen or an NSAID,” said Erica Reineke, an assistant professor at the University of Pennsylvania’s School of Veterinary Medicine. “We’ve seen more cats that get into antidepressants.”

Reineke explained that cats could experience problems with as little as 50 milligrams of ibuprofen for each kilogram of the cat’s body weight. In dogs, it would be problematic at a level of 100 milligrams to every kilogram of weight. So she couldn’t estimate what would qualify as a toxic amount. 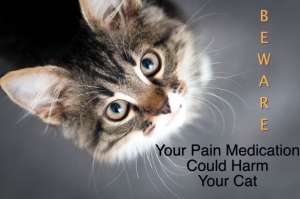 FDA recommendation
According to the FDA report, “FDA recommends that people who use topical medications containing flurbiprofen take care to prevent their pets from being exposed to them, even in ways that may seem unlikely to cause problems. Health care providers who prescribe topical pain medications containing flurbiprofen, and pharmacists who fill these prescriptions, should advise patients with pets to take care to prevent exposure of the pet to the medication.”

Considering that health officials are unclear how exactly the cats were exposed to the medication, it is a good incentive to look at natural pain relief alternatives. There are many natural anti-inflammatory foods and herbs that may lead to similar benefits without the worry of toxic side effects. Many of these options can be found in the links below.