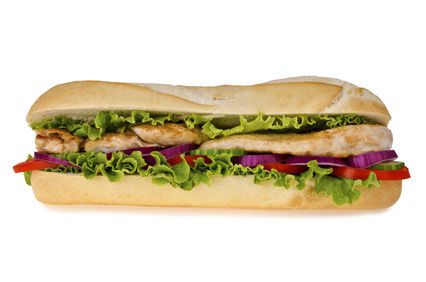 Earlier this month, the media was aflutter with reports of Subway restaurants’ decision to remove azodicarbonamide, a chemical used in shoe rubbers, from its bread. While this is good news, various other chemicals remain in Subway’s breads, and the removal of this particular one, while a small step in the right direction, does not make it healthy to eat.

Azodicarbonamide is used as a bleaching agent in foods, as well as a ‘dough conditioner,’ as it creates elasticity. It also creates elasticity in products such as synthetic leather, shoe soles and yoga mats, to name only a few. According to the World Health Organization (WHO), this chemical, “can induce asthma, other respiratory symptoms, and skin sensitization in exposed workers. Adverse effects on other systems have not been studied.”

It is the lack of studies done regarding the safety of this additive that is truly troubling. While legal in the United States and Canada, azodicarbonamide is illegal in Europe, Australia and parts of Asia.

Vani Hari, the founder of FoodBabe.com, recently circulated a petition, which received about 58,000 signatures, urging Subway to stop using the chemical. Subway responded, and has agreed to phase out the use of the product in the US. A company spokesperson states, “we are already in the process of removing azodicarbonamide as part of our bread improvement efforts despite the fact that it is an FDA approved ingredient. The complete conversion to have this product out of the bread will be done soon.”

However, even without this very unwelcome additive, a quick read of Subway’s bread ingredients  shows that it is only a small part of the problem. Their ‘9-Grain Wheat’ bread, for example, touted to be a healthy choice, contains over 30 ingredients.

These include soybean oil, which likely hails from GMO soybeans, artificial caramel coloring, and yeast extract, which is often used as a cover-up name for monosodium glutamate (MSG), which is well-researched as a dangerous neurotoxin. And don’t forget about gluten (wheat, barley and rye); for a much larger percentage of the population than most realize, gluten is quite harmful to their health.

Hari states that although multiple other companies, including Kraft Foods, use azodicarbonamide, she decided to target Subway first because of their image as a healthy option. She says, “they have an American Heart Association logo and stamp on their sandwiches. I really had the illusion of healthy eating. When I saw what was actually in the bread, I was horrified.”

Even the bread is just the tip of the iceberg. We haven’t even gone into the dangers of Subway’s chemically-processed meats, cheeses and sauces. Not a healthy option.