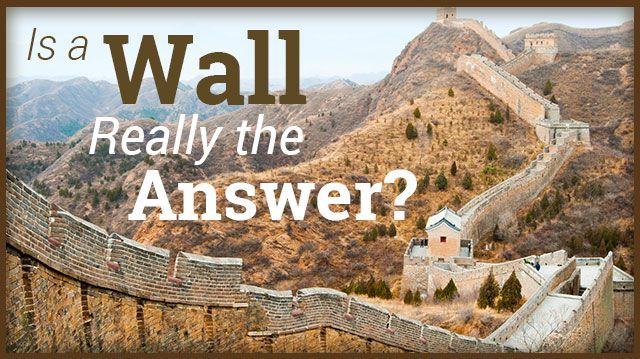 Terrorism, drugs and jobs are always major talking points for politicians. With the 2016 presidential race in full swing, utterly wacky solutions to some of these problems are becoming major planks in candidates’ platforms. One absurd idea involves building a wall between Mexico and the United States, and while it isn’t a new concept, it’s an idea that, quite frankly, is laughable.

It’s one thing to be Donald Trump, talking about how illegal immigrants are ruining the economy, bringing drugs across the borders and generally corrupting our way of life, and it’s another thing to actually interact with immigrants — both legal and illegal — on a daily basis. I’m from the great state of Texas, and it’s very easy for a white girl like myself to be the minority in a heavily Hispanic part of town.

Are they all legal? I don’t know. Do I care? Honestly, I don’t. If immigrants are here illegally, it’s because they’re trying to get to a better way of life that my own family pursued just three generations ago, and the U.S. government makes it incredibly difficult to do it legally.

Not only is it unnecessary, building a wall between the U.S. and our southern neighbor is a bad idea for several reasons.

“Building a wall is easy, and it can be done inexpensively,” said Trump, according to The Washington Post. “It’s not even a difficult project if you know what you’re doing.” I didn’t realize Donald Trump was really a mason.

All sarcasm aside, as Richard Stana of the Government Accountability Office wrote before he retired in 2011, “It’s extremely challenging to put a brick-and-mortar wall along the Southwest border for any number of reasons. It seems very simplistic.”

As The Washington Post points out, the Department of Homeland Security already spends millions of dollars annually to maintain and repair fences that already line the border. And those fences only keep the good guys from crossing the border. Smugglers and drug traffickers simply tunnel under the fence to get to the U.S. I can’t even imagine how deep into the ground an effective tunnel would have to be to keep the bad guys from digging their way to our side.

The border stretches across nearly 2,000 miles of land — 1,954 miles to be exact — and in some places, like between San Diego and Tijuana, there are multiple fences that separate one side from the other. Border Patrol officers monitor the area with armored trucks, bright lights and cameras, yet people still try to cross there. But that’s not all.

It’s bad for the environment

We talk a lot about the environment at The Alternative Daily, and I for one am a big fan of the Earth; it’s the only planet with coffee. Well, the wall is an absurd idea from an environmental standpoint too. A report from the University of Texas School of Law titled, “The Environmental Impacts of the Border Wall Between Texas and Mexico,” asserts that the impact on the environment and local wildlife would be significant. 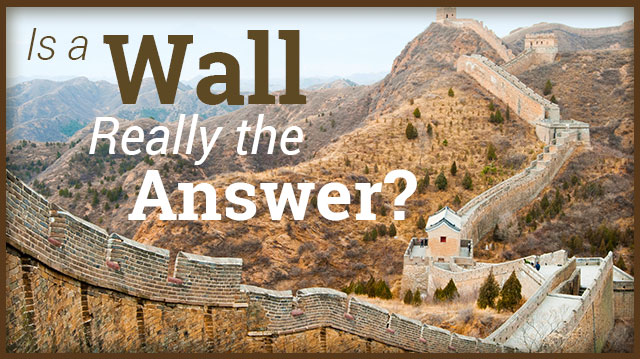 The report points out that in April 2008, Michael Chertoff, the Secretary of Homeland Security used his authority to waive all environmental statutes that would apply to the construction of a wall between Mexico and the United States. Such statutes included those required by the National Environmental Policy Act (NEPA), which requires an analysis of any “major Federal actions” that affect the environment in a significant way, and the federal Endangered Species Act (ESA), which requires a consultation with the Secretary of the Interior to discuss how a major project would impact threatened or endangered species. So all of that is to say that there hasn’t been sufficient governmental research into the impact of a wall along the U.S.-Mexico border.

Despite the fact that the government is ignoring the impacts, the wall would cross over — and destroy — part of the Lower Rio Grande Valley National Wildlife Refuge and The Sabal Palm Audubon Center and Sanctuary. Some of the land in the area is also owned by the Nature Conservancy and serves as a wildlife sanctuary.

Species on both sides of the border would be impacted, like the ocelot, jaguarondi, the Northern Aplomado Falcon, Mexican wolf, and Southwestern willow flycatcher. As the report states, the Mexican gray wolf is “the most endangered mammal in North America, [and] is currently the subject of intense reintroduction efforts in Arizona and New Mexico.” A wall running right through such sanctuaries could be catastrophically detrimental to the efforts conservationists are making to bring the wolves and other species back to the region.

Perhaps the biggest beef I have with advocates of a wall is that the rhetoric just reinforces a larger problem: ethnic tension and racism. As Don Melvin of CNN writes, walls have stretched borders between regions and countries for thousands of years. “Ethnic tension, national rivalries and mass migrations seem to be permanent parts of the human condition,” writes Melvin.

As author and anthropologist at the London School of Economics and Political Science, Ruben Andersson, points out, fences don’t actually solve anything. “Fences also generate novel and more dramatic entry methods, such as the collective ‘runs’ at the fences we have seen at various borders in recent years,” Andersson says.

Melvin cites various walls around the world that have done little to ease the tension between various ethnicities or sects.

Wall advocates seem to think that building a massive structure between two countries will somehow solve all of our problems. It’s magical thinking to believe that a structure could suddenly cut off significant portions of the drug trade, curb terrorism or bring more jobs to the United States.

What if the real problem comes from immigration requirements and laws that make it so hard for immigrants to come to the United States legally that they’re willing to take the chance of getting caught? What if the real problem is that we see immigrants as “other” than us? I’m not so naïve to think that we’ll be able to overcome our preconceived notions about other cultures just by being exposed to a couple of tolerant politicians, but loud personalities that preach against other cultures and are in favor of a wall might be steering us in the wrong direction.

What are your thoughts on a wall between Mexico and the United States?