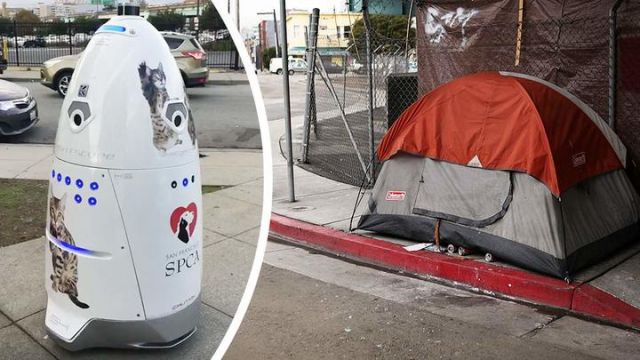 Life is hard enough when you are homeless. Not having a roof over your head means you are exposed to the elements and vulnerable to being victimized by criminals.

Now, there is a new kind of threat that drifters and the dispossessed face. In San Francisco, robots are being deployed to deter homeless people from setting up tent communities outdoors.

According to recent news reports, a battle has been brewing between robot “security guards” and destitute street people who are desperate for a place where they can find refuge.

Are fleets of police robots in our future?

Recently, fleets of robots equipped with lasers, video camera and other sensors have been patrolling parking lots, company campuses and other private spaces in San Francisco, California. The devices are part of a growing trend in which automated robots are deployed to detect and deter crime. Some AI experts envision these contraptions as the next generation of crime fighters.

In fact, companies like Microsoft and Uber are already renting out robot fleets to augment their human security guards. At $7 an hour, these crime-busting droids are a lot cheaper to hire than their flesh and blood counterparts. But some observers worry that wealthy elites will ultimately use an army of robots to police the rest of us.

As you might expect, the homeless are fighting back. As one report noted, at least one robot has been tipped over and had its “electronic eyes” plastered with barbecue sauce.

In this instance, the group deploying the robotic security guard happened to be an animal welfare group called the Society for the Prevention of Cruelty to Animals, which was trying to protect one of its parking lots from becoming a homeless encampment. I think you can argue that both groups deserve some sympathy and understanding.

In the future, the moral issues involving this technology are likely to grow much starker. A defense organization in China is developing a robotic device called an AnBot, which could be used to quell civil unrest. As one of its developers explained, “It can patrol, avoid obstacles, identify and recharge on its own. It is equipped with weapons to prevent and control violence by remote control.”

We often look to technology to solve our problems, but it is often a double-edged sword. The same devices that are supposed to make life easier may also be employed someday to oppress a large segment of humanity.

When you think about it, it’s ironic that so many resources are going into developing these robots. Perhaps that money would be better spent developing solutions that help the homeless.

That’s my take. Let me know what you think in the comments section. By the way, you can check out the Knightscope robot for yourself in this video (below).