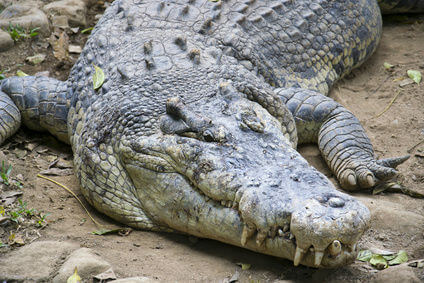 Even the most avid of animal-lovers can be unintentionally guilty of turning a blind eye when it comes to the leather industry. Some don’t eat meat, others refuse furs, yet how many people don a leather belt or bag every day?

The sad truth is that while you may think leather is simply a byproduct of the dairy industry, think again. The leather business is a major player in the economics of the cattle industry and is teaming with misrepresentation and a heart-breaking underworld of animal cruelty, environmental contamination and human health hazards.

People tend to believe the misconception that leather is a mere byproduct of the dairy industry. Yet, the skin of a cow accounts for 10 percent of her total worth, making the hide an extremely profitable component when she is no longer useful as a dairy cow. And calfskin is often sold at a pretty penny, which contributes greatly to the success of slaughterhouses and dairy farms.

But these animals aren’t living in the lap of luxury. On the contrary, most are confined into ridiculously tight quarters and starved until they literally collapse from exhaustion. In India for example, where a majority of our leather comes from, the slaughter of cows is illegal as the cow is considered a sacred animal, so these poor creatures are either illegally slaughtered in unlicensed facilities or forced to endure such treacherous living conditions that they simply drop dead.

It’s not much better in China, the world’s leading leather exporter. Buy a bag from China and there’s a very good chance it could be the skin of a dog. According to People for the Ethical Treatment of Animals (PETA), an estimated 2 million dogs and cats are skinned each year for leather production. However, the product is often misrepresented so innocent consumers have no idea as to the source of their new shoes or wallets.

Factory-Farmed and Oh So Exotic

A major fashion trend that has led to the seedy business of factory-farming certain species for their skin, is that of exotic leather. Zebras, bison, alligator, elephants, boars, lizards and countless other species are forced into horrid conditions for their prized hides.

According to PETA, young alligators often live in tanks above the ground while older ones are crammed into pools sunken into a concrete slab. And illegal farmers have no compassion for these animals. In fact a Georgia farmer had over 10,000 crammed into four buildings on his property.

In Australia, kangaroo skin is used to make premium soccer shoes and the government encourages hunters to either shoot or beat the animal on the head to kill the brain. Snakes and lizards don’t have it any better. Many are often skinned alive under the assumption that the skin is more supple when the animal is brutally and painfully slaughtered this way.

Hazards to the Environment

Aside from the fact that in many cases the slaughter of animals for their skin is inhumane, the process is also extremely hazardous to the environment. Until the late 1800s, leather was dried via the use of air and salt and tanned with vegetable tannins.

Today, toxins such as formaldehyde, coal-tar derivatives and cyanide-based finishes are often utilized. And the waste from tanneries is substantial, including 15,000 gallons of water and 2,200 pounds of solid waste that includes flesh, hair, nails, etc. for every ton of hide processed.

Furthermore, the water and land around tanneries are contaminated with an obscene amount of toxins. In once instance, arsenic, cyanide, lead and chromium were still present in the areas surrounding a tannery that had been closed down for over 20 years.

The Centers For Disease Control and Prevention found individuals working in or residents living near tanneries had higher incidences of leukemia, as well as sinus and lung cancers due to exposure to the toxins utilized in production.

So the next time you see a leather bag, briefcase or pair of shoes with your name on it, check the label. There are several companies that support the ethical treatment and slaughter of animals and these are usually stated on the product. And when in doubt, just go faux.