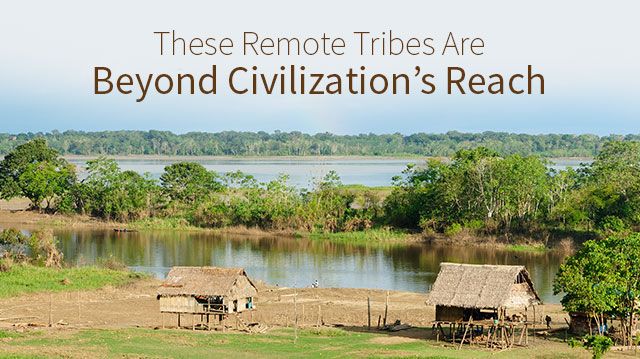 With the advent of the Internet, satellites and drones, it seems hard to imagine that undiscovered groups of people still exist on our planet. Yet it’s a big place. There are still tribes all around the world who have avoided contact with modern civilization. Having never been introduced to current trends, technological advancements or present-day language, many live the same way they have for hundreds — even thousands — of years.

While some remote tribes have been studied by anthropologists, researchers are careful not to disrupt their traditional ways of life. This has allowed hidden ethnic groups to avoid exposure to modern concepts, even basic ideas such as time, money and gender roles. It is truly incredible to understand how and why certain tribes have avoided assimilation into modern civilization. Here are five remote tribes where modern concepts don’t exist.

Behind densely forested jungle canopies and a terrain perilous to outsiders, the Amazon hosts nearly 100 tribes isolated from civilization as we know it. In fact, when the Brazilian government sends planes over Amazonian territory to search for new peoples, it is not uncommon to have rudimentary arrows launched at aircraft from tribespeople below.

The Kawahiva tribe is one of the most remote tribes known to researchers. They remain uncontacted by the outside world, and as such very little is known about the way they live. What is known is that they are predominantly nomadic hunter-gatherers with no concept of currency. They live in communal housing and most responsibilities — cooking, hunting, building shelter — seems shared between men and women.

Unfortunately, the Kawahiva tribe is on the brink of extinction due to logging and deforestation. This small group of a few hundred tribespeople have been chased from their homes in order to make way for road and dam building projects. It’s no wonder they seem to prefer to remain uncontacted by the modern world.

Known by anthropologists as the most isolated group of people in the world, the Sentinelese are notorious for having avoided modernity through violent means. Located on North Sentinel Island, India, little is known about this tribe due to their hostility towards outsiders. But after living for nearly 60,000 years in isolation and unaware of technological advances, how would you react to seeing a helicopter flying close to your jungle home?

The Sentinelese are hunter-gatherers, living mainly on fish, turtles, small birds and coconuts. Little is known about them other than their diet, mainly due to the fact that they have been known to murder any outsiders attempting to visit their island. What can be assumed, however, is that this isolated tribe lives far from modern comforts.

Found in the Amazonian rainforest, this small Brazilian tribe truly exists outside of modern life. They were first contacted or “discovered” in 1986. Until then had been living completely unaware of the outside world. Perhaps most interesting about the Amondawa people is that they have no concept of time as we know it.

According to anthropological studies, this tribe has no language to describe the passage of time. They do not recount events in reference to time, nor do they recognize the notion of age. Instead, they describe their growth in terms of life-defining events, or rites of passage. As the Amondawa remain in contact with present-day Brazilian culture and begin to learn Portuguese, their language is at risk of being lost. As such, anthropologists are making a concerted effort to understand the tribe’s linguistic representation of time and space before their culture fades into history.

The tropical island of Papua New Guinea is also home to some of the most isolated tribes in the world. The Korowai tribe, found in Indonesian New Guinea, is thought to be one of the last groups of people on Earth to still practice cannibalism. There are approximately 4,000 remaining Korowai and many tribespeople live without knowledge of the outside world.

Living in incredible treehouses 140 feet above the dense island jungle, the Korowai maintain their tradition of myth-telling and folklore and are said to fear Westerners and white-skinned people. Although anthropologists say that the tribe has done away with cannibalism, it is suspected that the eating of human flesh continued until very recently among tribe members. 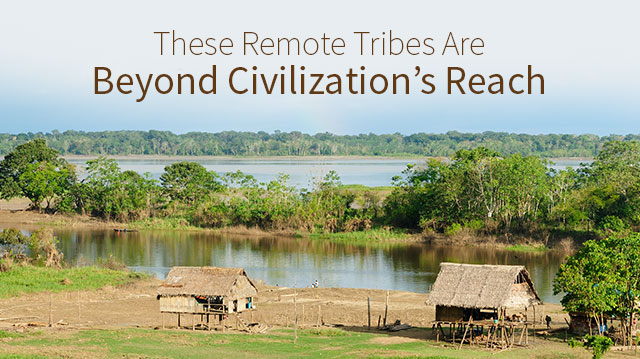 Known for their extravagantly stretched lips and ears, this Ethiopian group of three tribes (named the Suri, Mursi and Me’en) has been studied for years by researchers and anthropologists. Despite frequent contact with the modern world, the Suri people have rejected assimilation and fight to maintain their traditions. The only modern concept they have incorporated into their lifestyle is money.

Living in groups of a few hundred, the Surma continue a nomadic life of cattle ranching. Women are seen as the heads of households and are solely responsible for family finances. Cows are the main source of status among Suri men, and most families own between 30 and 40 of them. The Suri people often engage in turf battles between tribes and live in a volatile world as a result of the violence.

Global expansion has endangered the traditional lives and cultures of many indigenous peoples. Nevertheless, approximately 100 undiscovered tribes remain throughout the world. Thought to live mainly in the Amazonian rainforest and the jungles of Papua New Guinea, these tribes live completely unaware of modern advances and civilization. It is only a matter of time before they will be introduced to the outside world and many will be forced to decide to assimilate or fight to maintain traditional ways of life.

Do you see the importance of allowing these remaining uncontacted tribes to exist as they always have? Or do you think they would benefit from assimilation into the modern world?