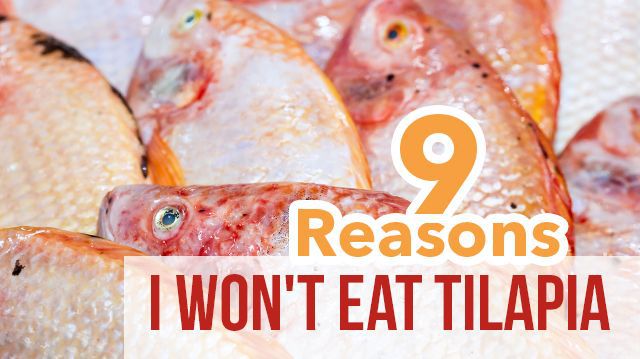 For six years, my family owned a seafood restaurant — ugh, don’t even get me started. Every Friday night throughout high school and university, I would serve tables to help my mom. After all, family is family, right? Rolling in late to parties and functions, my friends quickly gave me a nickname: “Halibut Queen.”  Yeah, cute.

After my family sold the business, I walked away with some great customer relationships, experience and, well, an extensive knowledge of fish. One species that never made it onto our menu was tilapia — my mom always said it was a “dirty” fish. Of course, I know a lot more now than I did then. It appears that my mom wasn’t too far off.

9 Reasons I Won’t Eat Tilapia — Will You?

If you’re a fan of fish, you’ve probably been told to stay away from certain species. We often hear of high mercury levels and sustainability issues, but how do you know which fish to eat? You would think fish that is readily available would be fish that’s good to eat. This logic makes sense, yet for some reason, tilapia is one of the most commonly sold fish, as it’s quite affordable.

Let’s unravel this mystery, shall we? How can one species of fish be worse than others? I’ll give you a hint: It’s not the fish, it’s humans. In order to meet higher demands, we have changed our methods. What was once an industry of small boats and fishing towns quickly turned into “factory-like” ships, and on top of that, we are now farming fish like it’s going out of style.

Exclusive: Podcast #19: Why Tilapia Is The WORST Fish Ever

Before you pick up that next piece of tilapia, remember the following nine things.

The majority of tilapia is sourced from China

A number of reports warned consumers about Chinese tilapia, due to poor food quality, as well as the heavy use of chemicals and antibiotics. According to Monterey Bay Aquarium Seafood Watch, in 2013, over 95 percent of the tilapia consumed in the United States came from overseas — with a whopping 73 percent coming from China.

May increase risk of cancer

Fish is a great source of protein and omega-3 fatty acids; however, farmed fish is not only less nutritious, it’s exposed to a range of chemical cocktails. Farmed tilapia contains high levels of pesticides and even flame retardants, as well as high concentrations of carcinogens.

What’s even worse is that only two percent of the seafood imported into the United States is inspected. In 2002, food analysts detected nitrofuran, even though this suspected carcinogen had been banned in the US since 1983. It makes you wonder what else is being used without our knowledge.

A study published in the International Journal of Food Science and Nutrition found that farmed tilapia has low levels of omega-3 fatty acids yet very high levels of omega-6. This imbalance is known to promote inflammation, encouraging the development of disease, including asthma, heart disease and arthritis.

Research has shown that fish do experience both pain and stress. Unfortunately, farmed tilapia are raised in tight, confined spaces. They lack a natural environment, experiencing a high-stress life. To make matters worse, they are often killed using methods that are painful, such as starvation or asphyxiation.

Since farmed tilapia are held in such close quarters, disease spreads like wildfire. Unfortunately, not only surrounding fish are affected, but also other wild species who come into close contact with these farm pens. Infections and viruses are not uncommon, which can dramatically affect local ecosystems.

If you’re someone who cares about purchasing grass-fed beef or free-range chickens, why not take the same approach with fish and their diet? We often assume that fish comes from the wild, but as we know, this isn’t generally the case. These fish are fed corn, soy and even chicken manure instead of a natural plant-based diet. As you can imagine, this will affect nutrition levels and the overall quality.

It’s been reported that the large majority of tilapia sold in the United States has essentially undergone a “sex change.” During the early stages of their lives, these fish are fed methyltestosterone — a growth hormone. Although the use of this steroid is said to be safe for human consumption, studies have shown that it can have dramatic effects on the liver.

There are much healthier options

We need to move away from the concept that our food is being raised and produced “out of sight and out of mind.” Don’t let the popularity of tilapia fool you — you can make healthier, more sustainable choices.