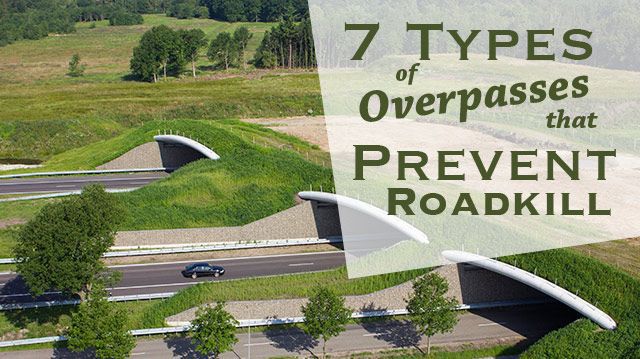 Since there’s no foreseeable reduction in traffic — quite the opposite actually — wildlife crossings are desperately needed to protect precious wildlife. They have good track records for safeguarding animals of all types and sizes.

Although dead animals along the road are the most obvious signs of the damage motor vehicles cause wildlife, the issue goes beyond roadkill. Highway construction and suburban sprawl also

While all animals, including domestic ones, are affected by motor vehicle mortality, large mammals are at greatest risk. That’s because of their low reproductive rates and extensive ranges.

Back in the 1950s, France was the first country to construct wildlife bridges. The concept spread rapidly in Europe, but was slower to take root in North America. Fortunately, that is beginning to change.

Wildlife crossings run the gamut, and many are designed for specific species or sites. Common crossings include the following:

Creating crossings is no easy task. It requires the cooperation of local, state and perhaps federal officials, along with wildlife biologists, planners, engineers and community members. Researchers must analyze not only where animals cross highways, but how they reach that destination. Tools include GIS technology for habitat connectivity and cameras monitoring wildlife activity near roadways and animals passing through culverts and over bridges. It can take years and considerable amounts of money, but such crossings save innumerable wildlife.

Canada’s vast Banff National Park also has a large number of wildlife crossings allowing animals to cross the four-lane Trans-Canada Highway running through the park. That includes 38 underpasses and six overpasses. Fencing was erected along parts of the highway to keep wildlife off. The hooved animals’ roadkill rate has since plunged by 96 percent. The National Wildlife Federation reports that cougars and bears prefer the longer, lower underpasses, while wolves, deer, elk and grizzly bears prefer to cross via overpasses. Smaller species would rather travel through drainage culverts.

In the Mojave Desert, endangered desert tortoises were becoming roadkill victims on Highway 38 in California’s San Bernardino County. Converting culverts under the highway to tortoise passages has significantly reduced the carnage. The culverts were revamped so they were flush with the ground, and boulders were placed around the entrances to attract tortoises. These animals are slow, and it can take hours for a tortoise to get from one side of the road to the other through the culvert.

Mountain goats are smart critters. That’s one reason they easily adapted to underpasses created for them under Highway 2 in Montana’s Glacier National Park. The goats need to reach a natural salt lick located along the Flathead River. The underpasses were built in 1984 during a road reconstruction project, and the goats have faithfully used them ever since.

Salamanders used to die en masse during mating season in West Amherst, Massachusetts, as they attempted to cross a road between woods and the pond where they would lay eggs. A community effort — including the West Amherst Department of Public Works, the University of Massachusetts and local environmentalists — resulted in the building of two tunnels at the crossing site. The site includes fencing to encourage the amphibians to head into the tunnels.

Salmon, trout and other migrating fish aren’t getting hit by cars, but their routes are often blocked by dams and culverts. Fish ladders, also known as fish passes, allow fish to avoid or get around the barrier. The “ladder” consists of a series of low steps with sufficient water velocity so that fish can swim to the other side. Another option is replacing culverts that do not permit fish access with archways that allow them to pass.

Perhaps, someday, human transportation will evolve so that road carnage rarely occurs. Until that happens, wildlife crossings are the best way to protect the creatures that share our planet and encounter our roadways.