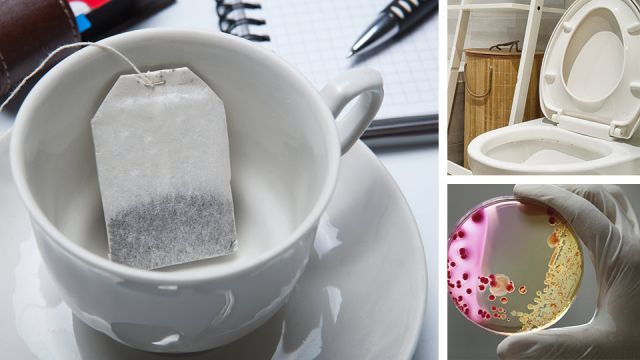 It’s winter. It’s cold, and when it’s freezing outside there’s nothing quite like a hot cup of tea. However, that innocent tea break around the office might not seem so refreshing once you know how gross your morning cuppa might be. The short answer: it’s so, so much worse than you think.

The average box of office tea bags contain a whopping 17 times more bacteria than a toilet seat. That’s according to a report from Initial Washroom Hygiene. For reference, the average toilet seat has a bacterial reading of around 220. However, Initial’s researchers found office teabags easily outpace toilet seats in terms of just being really gross.

No, that’s not how many cups of tea you’ve had this week. That’s the bacterial reading for each box of tea bags, as found by Initial’s researchers. However, that’s just the tip of the iceberg. The same report also noted researchers found readings of 2,483 on kettle handles, making them over 10 times more germ-ridden than the much-maligned toilet seat.

So at this point, you might be considering ditching the cuppa, and bee-lining straight to the fridge for lunch. Too bad, because the fridge is probably laden with germs as well.

According to the report, the average office fridge door handle is a paradise for germs, with bacterial readings as high as 1,592. That’s almost as bad as the 1,746 reading researchers found on the rims of used coffee mugs.

Everything is horrible because you never wash your hands

At this point, you might be bewildered as to how your office could be this dirty. The good news is that researchers have an explanation; the bad news is you might not like it. You’re probably to blame — you and all your coworkers who don’t wash their hands.

“These microbiological readings are typical indicators of poor hygiene,” an Initial spokesperson explained. For example, the report featured a poll of 1,000 office workers, which found 80 percent of people don’t wash their hands before preparing tea or coffee for colleagues. This, according to Initial, shows that “Workers could be exposing themselves to more harmful germs than they think on the tea run.”

The company’s Dr. Peter Barratt argued the findings should be a wake-up call for desk jockeys the world over with terrible hygiene habits. “If you stop to think about the number of different hands that touch things such as the kettle handle, tea bag box lid, mugs, and so on, the potential for cross contamination really adds up,” he said.

Barratt hinted the solution might lay in rectifying the fact that “many office kitchens seem poorly equipped to offer the users access to good hand and surface hygiene.”

Perhaps by coincidence, Initial happens to specialize in selling office hygiene products. Sadly, the company can’t just bulk sanitize everything in your life, which is probably something you’ll want to do after reading the list we’ve compiled of five things you didn’t know are far more germ-infested than a toilet seat.

Charles Gerba is a microbiologist at the University of Arizona, and he has just one little question for you: “When’s the last time you cleaned your cellphone?”

The answer is probably an awkward “ummm never,” and that’s why your ten is ten times dirtier than your toilet seat.

No matter how bad your phone is, it’s probably pristine compared to your keyboard. One study found keyboards can be up to 20,000 times dirtier than a toilet seat. Feeling like taking a really long shower yet?

Brace yourself, because now we’re entering the big league of disgusting everyday items. Everyone loves money, but it’s so dirty it’s not even worth comparing to the humble toilet seat. In fact, when it comes to being horridly dirty, cash blows toilet seats out of the water, literally. Bank notes are potentially as dirty as the toilet bowl itself, according to this study from the University of London. The study found one in seven bank notes are literally smeared with “fecal contamination.” That’s the technical term for, “Oh God, I want to throw up.”

Finally, we arrive at the Mecca of unexpected germs: your kitchen. Let’s start with the seemingly innocuous dishcloth. You know, that thing you wipe over all your dishes? Yeah, there’s a one in ten chance it’s covered in salmonella. Does that dishcloth live in the sink? If so, you’d be better off storing it in your toilet, which is around 100,000 times cleaner than the kitchen sink. But hey, at least it might not be as bad as your chopping board, which is probably covered in animal feces, not to mention E.coli, salmonella and Campylobacter bacteria.