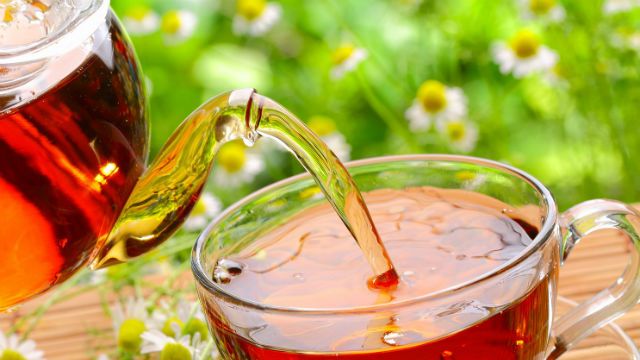 Tea, the most popular beverage in the world besides water, is soothing and delicious, but could it also increase your lifespan? According to a study recently presented to the European Society of Cardiology by Professor Nicolas Danchin, tea just may have a hand in longevity.

Professor Danchin’s large-scale study found that drinking tea can reduce the risk of death from noncardiovascular causes by 24 percent.

For the study, researchers surveyed the data of just over 131,000 individuals in France, between the ages of 18 to 95. Along with keeping track of their health data, the researchers provided questionnaires to the participants to indicate how much coffee or tea they drank. The individuals surveyed were followed up for an average of 3.5 years.

Results of the study showed that those who drank tea on a regular basis tended to lead healthier lifestyles, including exercising regularly and refraining from cigarette smoking. Therefore, they had a lower profile of cardiovascular disease risk than coffee drinkers. However, when the results were adjusted for smoking and exercise, coffee drinkers were no more at risk of cardiovascular disease than tea drinkers.

On this finding, Professor Danchin stated, “the trend for higher mortality in coffee drinkers is probably largely explained by the fact that there are more smokers in the group who drink a lot of coffee.” This correlation may be exclusive to France, where the study was performed, and may not be applicable to other nations.

However, compared to individuals in the study who did not drink any tea at all, tea drinkers were found to have a 24 percent lower risk of death from noncardiovascular causes. This in itself is significant, and is likely related to the health benefits of tea.

According to Professor Danchin, “tea has antioxidants which may provide survival benefits. Tea drinkers also have healthier lifestyles so does tea drinking reflect a particular personal profile or is it tea, per se, that improves outcomes – for me that remains an open question. Pending the answer to that question, I think that you could fairly honestly recommend tea drinking rather than coffee drinking and even rather than not drinking anything at all.”

While organic coffee has also been found to offer significant health benefits, the perks of tea are not to be missed. Tea contains an abundance of flavonoid antioxidants, which can help to lower inflammation throughout the body and reduce the risk of many chronic illnesses. While black tea is a good choice, many experts agree that the healthiest tea you can drink is green tea.

Green tea leaves are simply the withered and steamed leaves of the Camellia sinensis plant. Black tea leaves also come from this plant, but they go through the additional processes of crushing and fermenting. The health benefits of green tea come from its increased retention of polyphenol antioxidants, including catechins, epicatechins and other flavonoid antioxidants.

This tea has been linked to increased endurance, lowered blood pressure, lower risk of type 2 diabetes, healthy teeth and gums and aiding in weight loss efforts, along with combating oxidative stress damage in the body. One catechin found in green tea, epigallocatechin-3-gallate (EGCG), has been linked to significant anticarcinogenic properties.

Whether you choose green tea or black tea, go for an organic variety that has been naturally fermented without the use of chemical additives, housed in a teabag that likewise has not been chemically treated.