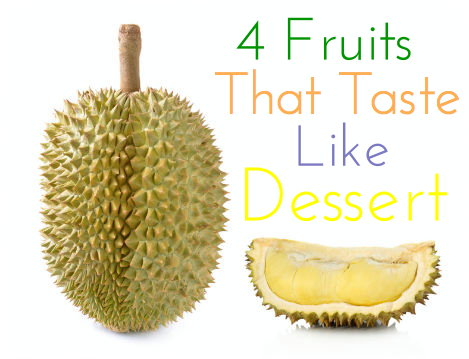 Maintaining a healthy lifestyle can be difficult for those who have an insatiable sweet tooth, especially when faced with the decision to eat a fruit instead of a brownie for dessert. It may surprise you to know that there are fruits that taste like rich, creamy desserts. The following are just some of the many selections of decadent, sweet fruits that could make switching to whole foods much more enjoyable.

Originally grown by Inca farmers in South America, the cherimoya is so rich and sweet that it is often called the “custard apple” or “custard fruit”. Do not be deceived by the appearance. It’s green, scaly exterior gives way to a creamy, custard-like flesh once cut open. This firm flesh has a hint of tropical fruit flavor, as if it were infused with pineapple or mango.

Despite its tropical taste, it is naturally sweet. Once cut in half, dig your spoon directly into the fruit, as if you are eating a bowl of pineapple-mango ice cream. The large seeds can easily be spooned out and placed aside. If you decide to give the cherimoya a try, allow the fruit to ripen at room temperature and then refrigerate once it has ripened.

Native to Guatemala and Mexico, the black sapote is often used in ice cream, liquors, dips and desserts. Like the cherimoya, black sapote also has a creamy texture and can be eaten raw. It is called the “chocolate pudding fruit” due to its nutty, sweet flavor, but has no caffeine and is a nutritious alternative to store-bought chocolate pudding. Black sapote has a green exterior that turns chocolatey brown as it ripens. Although it can be hard to resist this fruit, you must wait until it is fully ripe or else it is inedible.

Although dates are often associated with raisins, prunes and other dried fruits, they can be dehydrated and ground up to replace sugar, or pulsed with water to replace caramel in recipes. Barhi dates are particularly unique because their flavor and colors change when ripened.

When they are yellow and firm, they bear a hint of coconut and cinnamon, which can add complexity to sweet dishes. When ripened to a light amber color, barhi dates release their stringy fibers and become gooey caramel bites. This versatile fruit can be refrigerated for months and can be used to sweeten any dessert, or just enjoyed as little fruit candies. 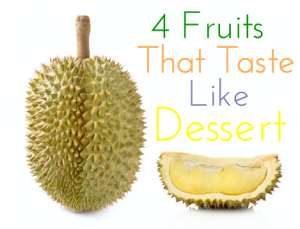 Durian is exotic for many reasons, the most notable of which is its scent. Durian is known as one of the smelliest fruits and is often likened to gym socks or rotten onions. If you are feeling adventurous, you will be rewarded with a sweet, creamy center that tastes like almond ice cream.

You can eat it as is or freeze it and blend with a little water or milk to make an actual ice cream. It is so tasty, in fact, that the Southeast Asians have dubbed durian “the king of fruits”.

Despite not having the processed sugars and refined flours often found in many desserts, these fruits are rich in nutrients and are truly nature’s candy. Experimenting with new fruits can boost enthusiasm and inspiration for implementing and maintaining a whole foods lifestyle. With over 7,500 varieties of apples alone, nature provides quite the selection of fruit to sample.