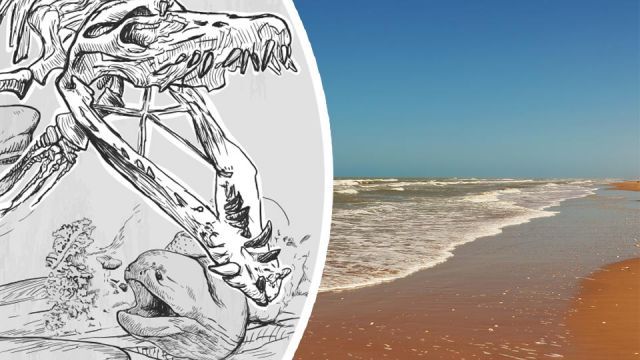 Following Hurricane Harvey, a peculiar aquatic creature washed up on a beach in Texas City, Texas, which is a suburb of Houston. The creature was originally discovered by twitter user @preetalina, who tweeted a picture asking if anyone, especially those with zoology knowledge, knew what the creature was.

Okay, biology twitter, what the heck is this?? Found on a beach in Texas City, TX. #wildlifeid pic.twitter.com/9IUuuL65qh

The images instantly went viral and received lots of responses from her followers and other intrigued Twitter users. One qualified responded, University of Washington fisheries sciences professor Adam Summers, said that the creature was identifiable “due to skin coloration, the body shape, the teeth and the shape of the jaw they are in.”

Biologist Dr. Kenneth Tighe suggests that there is a high probability the animal is a fangtooth snake-eel. The fangtooth snake-eel, known as Aplatophis chauliodus, is usually found in western Atlantic ocean waters in depths around 100 to 300 feet. It can’t be confirmed if the creature washed up on the beach as a direct result of the hurricane.

Others poked fun at the alarming photos:

It’s yet another reason I question my choices every time I swim in the ocean#JawsTrauma pic.twitter.com/WdjYD07SqL

This sea creature discovery brings back memories of other puzzling animals that have washed up on beaches. Most notably, the Montauk Monster, which washed up on a Long Island, New York beach in 2008. It became an internet sensation due to its bizarre and creepy looking attributes.

What are your thoughts on this discovery? Have you ever come across something that looked similar? Let us know in the comments!