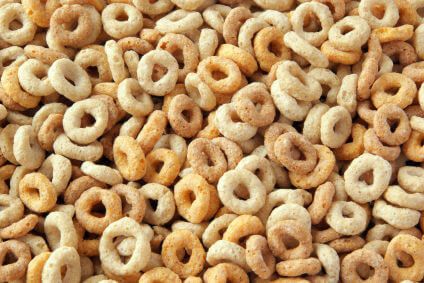 Once there was plain, now there are 12 different varieties. Cheerios has certainly cornered the cereal market. Since 1941, the Cheerio line has evolved, driven by consumers looking for new and exciting foods and of course, by a company’s hope of expanding their bottom line.

Cheerios are made by General Mills who claim that the friendly little “O’s” are a great addition to any healthy diet because they are low in saturated fat, low in sugar, cholesterol free and made with nutritious whole grains such as oats that provide a wide range of vitamins and minerals.

While Cheerios, originally called “Cherrioats”, has long been the American icon for robust health and touted as the best way to start your morning, there are a few things you ought to know:

Upon closer investigation, it appears as though the oats in 7 out of 12 varieties of Cheerios sold in the United States do not make up the bulk of the product. All of the cereal varieties are made with whole grains and have less than 8 grams of oats each. In addition the oats in the cereals have have been ground into flour and do not have nearly the same health benefits as unprocessed whole grains.

The Cheerios website tells consumers that they process their cereals in four steps; mixing, cooking, forming and toasting. Although this sounds rather pleasant, the result of the famous “O” bears no resemblance to the whole grain it started as. The whole grains in this cereal are, in fact, entirely processed and of little nutritional value.

There are only 4 Cheerio cereals that actually contain less than 9 grams of sugar per serving. The other 9 types contain way too much sugar for anyone and certainly don’t make our cut for a healthy cereal option. Upon a closer look at the serving size, it was discovered that not all Cheerios have the same serving size recommendation.

The regular variety serving size is 1 cup and contains 1 gram of sugar and the Multi Grain variety has the same serving size but contains 6 grams of sugar. Other, higher sugar varieties such as Apple Cinnamon Cheerios, Honey Nut Cheerios and Chocolate Cheerios all have a smaller serving size of 3/4 cup. The main concern here is, who measures their cereal? Most people eat considerably more than the recommended amount.

Everyone knows that Cheerios reduce your risk of heart disease and do wonders for cholesterol, right? This claim was pushed so hard by General Mills that the FDA sent a letter in 2009 asking them to change their marketing strategies because what they were claiming would put them in a category of an “unapproved new drug.”

General Mills now claims that Cheerios CAN be a part of a healthy diet and COULD reduce the risk of heart disease. These new claims are allowed based on the fact that Cheerios contain whole grain (even if it is processed) and soluble fiber.

Additive Analysis
Butylated Hydroxytoluene (BHT): This food additive is used to keep the cereal fresh, but, in studies it has been shown to be a possible carcinogen.

Other known ingredients that have raised concern with health advocates include:

Corn, cotton, soy, canola, sugar beets and papaya are common genetically modified crops in America. General Mills gets all of its corn from the United States where almost 90% of these crops are genetically modified. Since corn is a common ingredient found in Cheerios, a red flag must be raised.

Another concern, of which most consumers are not aware of, involves Vitamin E. The Vitamin E in Cheerios comes from mixed tocopherols, which are usually derived from soy, corn or cotton – 3 of the most genetically modified crops. You can visit an extensive list of hidden ingredients in processed foods that are commonly genetically modified at the Non-GMO Shopping Guide site.

Since General Mills does not make an organic Cheerios or test for GMO ingredients the following, found in the ingredient list of the Cheerios product line are possible sources of GMOs

Multi Grain Cheerios have one GMO ingredient in the first three listed, whole grain corn. All of the first six ingredients in Cinnamon Burst Cheerios are likely genetically modified. Other varieties contain at least several suspicious ingredients each.

This analysis is rather sad since so many people feel “safe” eating a cereal that has been around for so long and seems to be a much healthier option that many other cereals on the market. Yes, the sad truth is, Cheerios contains a laundry list of controversial ingredients, unwholesome grains, and cheap sweeteners, not exactly the best fuel mixture for your body.

However, it appears as though General Mills, like so many other large food manufacturers, clearly has the wool pulled over our eyes with their catchy and warm advertising strategies and loose health claims. It’s time we broke free from the fantasy.

Keep in mind that the best breakfast foods are whole, simple, organic, fresh and not processed. Maybe it is time to trade in the high-priced box of synthetic ingredients for something more traditional and wholesome; we will let you be the judge!